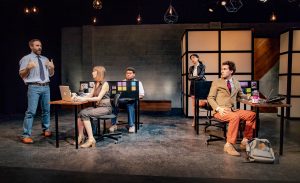 MacArthur “genius” grant recipient Branden Jacobs-Jenkins worked at “The New Yorker,” but has said in interviews that his Pulitzer Prize-nominated play “Gloria” is not based on his experience there. No matter. It rings so true — as any good fiction does. You can see the Echo Theater Company’s West Coast premiere of his 2015 work, directed by Chris Fields, at the Atwater Village Theatre through Oct. 28.

That job at “The New Yorker” was the only office job multi-award-winning playwright Jacobs-Jenkins ever had, but he captures the exasperating office caste system perfectly, and precisely dissects it. The first act of “Gloria” is a scathing and hilarious indictment of workplace politics at a fictitious magazine in the 2010s when publishing is suffering and the people in it are faring even worse. Arrows are slung with amazing precision and speed, and Jacobs-Jenkins’ writing hits home every time. Without giving anything away, let’s just say that while the dialogue is funny from the outside, we soon learn that in the “real lives” of these characters, it’s no laughing matter.

After tragedy hits in a very shocking way, we realize that “Gloria” is really an exploration of how we interact with, or ignore, the co-workers that we spend all day with. We also see how people, writers in this case, attempt to use, own or capitalize on other people’s (usually tragic) stories. Jacobs-Jenkins reveals himself as a master of psychological drama in this examination of working relationships, identity and ambition.

As in life, there is no black and white in this play — beyond the written pages used as props. Jacobs-Jenkins makes clever use of the same actors for multiple roles to emphasize this point. The casting, it turns out, is essential to the story, emphasizing how co-workers at whatever rung of the ladder can be almost interchangeable or practically anonymous. For example, Jessica Goldapple, who plays the pivotal character Gloria in the first act, portrays Nan, an editor whom we only met as a voice coming from a secluded office, in the second act. In a scene from the second act, Nan tells a heartfelt story about meeting with an intern and calls him Mark instead of Miles. Her publisher friend enthusiastically tells her she needs to write a book about her struggles with life and motherhood through the lens of the tragedy that she experienced that day at the magazine. As two other characters also work on manuscripts, we are constantly asking ourselves: Whose story is this?

All of the actors were incredible, swinging from realistic banter to angry rants and sorrowful reflections, and all but one taking on completely different characters from one act to the next. Lorin (Steven Strobel) is the only character we see from beginning to end — a fact-checker so frustrated he says he wants to kill himself. After a major rant in the first act, he got a much-deserved round of applause. He becomes our linchpin in making sense of the characters and stories.

Michael Sturgis’ perfect combination of ennui and annoyance with a dash of self-righteousness had the audience laughing a lot at Dean, a lowly (but the most senior) editorial assistant playing by all the rules, getting nowhere and pushing 30. Devere Rogers displayed great comic timing as an intern, a Starbuck’s employee and a young TV exec. Jenny Soo was impressive as a brutally outspoken Harvard grad from Pasadena who thinks she’s better than everyone else and has what it takes to leave the other editorial assistants behind — by making personal Starbuck’s runs, and not actually working.

Chris Fields, who directed the recent “What Happened When” with the Echo Theater Company (the play reopens with a new cast Sept. 27), has brought us another must see. The tragedy of “Gloria” takes us by surprise, but the playwright helps us deal with what we’ve witnessed. We can relate — and we start to rethink our place in other people’s life stories.