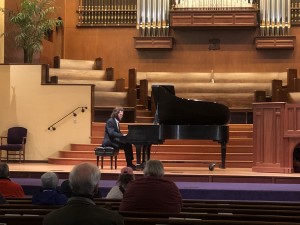 Brendan White in performance at the Glendale City Church on Jan. 16, 2019. / Photo by Néstor Castiglione

It was an incongruous, yet curiously stimulating mingling of incense and sulphur that awaited the listener Jan. 16 at the Glendale City Church. On one hand, the dulcet lyricism of gratitude to the Creator of creators from the future Abbé Liszt; on the other, the chtonian cries—part Aubrey Beardsley, part Aleister Crowley—of the voluptuary Alexander Scriabin.

Heaven and hell seemingly were bridged across the 88 keys of Brendan White’s piano, whose touch and sensitivity tended towards the angelic rather than the demonic. Describing himself as a “super nerd” at a recital in Pasadena last year, White showed his listeners that he also possesses a heart to guide and temper the impulses of his brain.

Choosing the Bénédiction de Dieu dans la solitude from Franz Liszt’s Harmonies poétiques et religieuses, White demonstrated his attractive grasp of a score’s long line, his impeccably judged and executed sense of voicing and textural coloring which effortlessly hoisted aloft Liszt’s luxuriously spun melodies. Each of the gorgeous, poignant harmonic modulations which function as this music’s expressive nodal points were painted with a subtlety that, as in its best performances, reveal it as an aural counterpart to Titian.

If Scriabin the man of action, the wild-eyed mystic whose ardent wish was for the collapse of the universe upon the performance of his final (and unrealized) work, was largely absent in White’s rendering of his Fourth and Tenth Piano Sonatas, his spotlighting of the composer’s dreamier side was nevertheless beautifully and persuasively realized.

Perched upon the precipice of atonality and world war, his Tenth Piano Sonata can sound like a foreboding call from the saturnine depths of a malevolent dimension whose lights are only barely discernible upon the outermost horizons of human consciousness. White subdued these malevolent strains, finding that the promise of destruction can also be an opportunity for rebirth. His was a highly fragrant Scriabin, bright-hued, deeply thoughtful. It was “gentleman” Scriabin, if you like. One could imagine Sir Adrian Boult possibly reversing his terse dismissal of the composer’s music as “evil” had he heard White’s playing of it.

White has been making the rounds of local recital series over the past year, appearing regularly in venues across Southern California. He’ll be appearing in the Glendale Noon Concerts again, this time as chamber partner, next month and as guest soloist in Pasadena in March. This latest recital bore eloquent testimony that the Tennessee native is clearly a musician to watch.