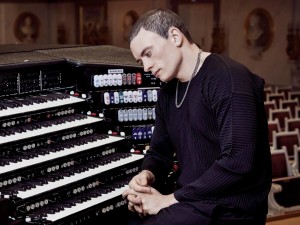 Cameron Carpenter dazzled audiences at Disney Hall with his interpretations of Bach.

On Sunday night the American organist Cameron Carpenter wowed and dazzled what one organ series subscriber called the largest crowd she had ever seen for an organ recital in Walt Disney Concert Hall. Carpenter obviously has a following.

Carpenter most recently played in WDCH this past November when he performed the Concerto for Organ and Orchestra in G minor by Poulenc and the “Organ” Symphony by Saint-Saëns (see our review at http://culturespotla.com/2018/11/roderick-cox-conducts-the-la-phil-with-cameron-carpenter/)

We raved about him then and will rave about him here.

Cameron is clearly a Bach expert — as most organists probably are considering the extensive canon for organ composed by the master. But Cameron rarely plays Bach straight. Thus, the French Suite and the Toccata and Fugue in D minor were credited as Bach/Carpenter. In the French Suite, he added his own touches in the way he changed the registers and volume for each of the sections. For the Toccata, Carpenter also changed some of Bach’s phrasing and added some of his own.

The result in both cases was what might be called Bach-Plus! Whether one liked Carpenter’s touches or not — and Bach purists could not be blamed for not liking it — the outcome was both fascinating and exciting.

Carpenter had programmed two of his own compositions, including the “Serenade and Fugue on B. A. C. H.” and “Improvisation.” When it came time to perform them toward the end of the second half of the recital, Carpenter picked up a microphone and told the audience that he was foregoing the Serenade because it was a “lame” composition. Instead, he did something unusual: he brought to the stage Thomas Mellan, who double majored at USC in organ and composition, to play one of his own compositions. Carpenter’s rationale was to “share the spotlight” with young organists who can be given an opportunity to play a great organ in a great hall. The composition was definitely contemporary with no discernable melodies but was nevertheless interesting — the way other contemporary orchestral pieces are interesting — in the way it made use of the organ to create novel sounds. Carpenter’s “Improvisation” was much more accessible and melodic and more pleasing to the ears.

In addition to having organ chops like few others, Carpenter is a showman. He plays with an athletic flair, often throwing his hands up in the air to signal the end of the flashier pieces. On some of the pieces, his feet were playing the pedals so fast that if you didn’t know he was seated you’d swear he was dancing. He is the Fred Astaire of the organ!

In addition to the Mellan piece, Carpenter added a Trio Sonata by Bach.

The climax of the recital, however, was Bach’s Passacaglia and Fugue in C minor, arguably one of the pinnacles of Western artistic achievement. Carpenter mostly played it by the book, but still couldn’t resist adding his own touches and flair. Again, the result was a powerful, almost cathartic expression of both his and Bach’s musicality, and one that left the audience breathless, but cheering. He was called out for an encore, which he obliged by surprising the audience with an organ rendition of “Bluesette” by Toots Thielemanns.

Carpenter has a following not only because he is a consummate musician, but because he brings a youthful (he was born in 1981) and exuberant vibe to an instrument usually associated with religion and considered to be boring to listen to. Cameron’s playing is anything but boring. In fact, he’s really a rock star of the organ, and his talent was on full display on Sunday night. Oh yes, the WDCH organ sounded magnificent, at times shaking the rafters and causing some in the audience to cover their ears!