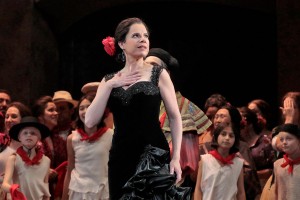 The twists of fate can be cruel for artists. Too often, they only gain renown years, sometimes centuries, after toiling their lives away in relative obscurity. Such is the case with Georges Bizet. With Carmen selling out at LA Opera and adding performances, and another of his operas, The Pearl Fishers, coming later this fall, you’d be forgiven for thinking that Bizet has always been a towering figure of romantic music. But he died at age 37 from a heart attack only three months after Carmen’s debut, convinced to the end that his final work was a failure. Well, lucky for us, how wrong he was.

Carmen, of course, is one of the top five operas of all time and probably has the greatest number of memorable tunes of any of them. Apart from the stirring music, audiences also are treated to one of the most compelling characters in opera — Carmen herself. Who is Carmen? Depending on the director and the singer herself, Carmen can be a lot of different things — a temptress, a diva, a seducer, a force of nature or a sly, Machiavellian manipulator. One thing she can never be is ignored, and soprano star Ana María Martínez makes certain of that.

Martínez’s Carmen is not the last word in fierce female seductive energy. Rather, she presents a confident, commanding manner that is understated, revealing more intelligence and inner determination than smoldering sexuality. In Act II, she woos Don Jose, singing, dancing on the table, her fingers mimicking the snap of castanets. She seems akin to a cobra, swaying rhythmically and hypnotically before striking. All in all, a meticulous, thoughtful performance.

The other main character of the opera is the feckless Don Jose, who falls for and is later cast off by Carmen. Very often, we see Don Jose presented as a noble, macho, commanding figure. Here, Italian tenor Riccardo Massi (he shares this role with Brandon Jovanovich) comes off like a big, somewhat dim galoot who is way over his head messing with the likes of Carmen. He seems perfectly suited for the meek home girl Micaela (Amanda Woodbury) who tries haplessly to gain his attention.

While the cast as an entirety is just OK, there are two sopranos who stand out — Liv Redpath and Kelley O’Connor who play Carmen’s friends Frasquita and Mercedes, respectively. Redpath in particular, an alum of the Domingo-Colburn-Stein Young Artist program, really soared, her voice filling the hall, easily rivaling the power of Martínez’s most powerful bursts. Another nota bene is due for the large children’s chorus, who added moments of lightness, grace and ethereal beauty to the proceedings.

This production, directed by Ron Daniels, comes from the Teatro Real in Madrid, and the sets are traditional, detailed and historically correct. Somebody obviously knows what old Seville looks like. The foreshortened city square, the classical detailing on the buildings, the crumbling sun baked walls — everything is in place as if lifted from an old travel brochure. The other sets — the interior of the inn, the mountain redoubt, and the exterior of the bullring — are equally well done.

The costumes are sort of standard dull peasant wear for the most part, appropriate, but not too compelling. Carmen first appears in a peasant blouse with a black bustier/corset, with a single red rose inserted in her décolletage. Effective and understated. A small gripe I have is with Escamillo: Daniels chose to have bass singer Alexander Vinogradov first appear dressed in a simple blousy peasant shirt and dark pants tucked into boots. Curiously unimposing, especially for a small man like Vinogradov. So we listen to the powerful Toreador song from a rather bland figure, at least visually; we do not get to see him in his glorious matador costume until the last few minutes of the opera. But these are quibbles.

Music conductor James Conlon has a sure hand with his orchestra, and the music drives every scene forward into the next. If you can still get tickets, see it, hear it and be transported — all the elements are here for a great opera experience.