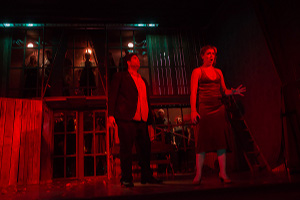 Hey, stagnant economy got you staying at home to save money? Flat wages crimping your entertainment mojo? Well, here’s a deal for you… you and three of your friends get your own front row table to see Carmen for $90 (advance purchase price, otherwise $100). Not good enough? OK, they’ll throw in a complimentary bottle of wine and a brimming platter of hors d’oeuvres too. And if you’re lucky (like I was), you’ll get hauled up on stage to join in a chorus along with the company. This is opera POP style.

POP is short for Pacific Opera Project, the brainchild of impresario and director Josh Shaw. Carmen is one of Josh’s so-called Pop-Up Productions — sort of like guerilla opera. He books a hall, hires some singers, and together they flesh out the opera concept and rehearse the hell out of it for a week — maybe two — before the curtain goes up. In this case, there’s a cast of 27 singers who rehearsed for all of eight days before the opening. While it’s not LA Opera quality in set design, costuming or production values, it’s also a lot more than you’d expect.

In the spirit of guerilla opera, there is no orchestra to support this Carmen. But there is a live solo piano player, Stephen Karr, who did a fine job of communicating the essentials of Bizet’s memorable score. There are also some high-level performers here. Nora Graham-Smith was memorable as Carmen, getting her character’s over-the-top passion, sexiness and disdain just right. While her voice was interesting in a darkish mezzo way, if I had to quibble, I’d deduct a few tenths for slightly rough transitions from her falsetto to her midrange. Tenor Adam Cromer as the lovelorn Don José used his extra-large size to belt out the notes, although his persona seemed a bit reticent in comparison to the object of his affections. The standouts vocally were soprano Aubrey Scarr whose clear, powerful voice filled the hall and baritone Babatunde Akinbuboye who was all swagger and bravado as the macho toreador Escamillo.

The costuming is more fun than fabulous, with the soldiers in camo shorts and baseball caps, while the women transit from black dresses to blue jean hot pants with cropped white tie-front blouses and red bandanas. The period seems to be vaguely Spanish Civil War, with some modern twists. The set, simply enough, consists of tall windows in back with rough vertical planks surrounding and a scaffold serving as a second floor. Draped curtains are used to suggest the hidden smugglers camp in Act III.

Little touches add a lot to this production. When characters kiss, it’s a real spit swapper, not the usual chaste sides of the mouth. When Carmen dances, she breaks a plate and clinks the shards together to accompany herself. And at the climax, we see Escamillo in silhouette behind a scrim raising his sword for the bull in pantomime, mirroring the actions of Don José as he confronts Carmen with his knife. Another aspect worth mentioning is the subtitling. The original French has been translated into a contemporary American argot that fits well with the informal mood and got a lot of laughs.

In the historic, compact Ebell Hall of Highland Park, nearly every seat is a good seat, and the audience gets a sense of being part of the production as actors frequently make their way through the tables to ascend the stage. I even had my unexpected opera debut, as another fellow and I were pulled up on stage during Act II to sit at a table on the side, a saucy wench perched in each of our laps, plied with (real) wine, food and song. Singing the few words I knew alongside Escamillo and the crew during the Toreadore chorus was undoubtedly my high point of the night.

This Carmen, the most accessible of operas, is as raucous and charming as can be. For $15 general admission ($20 at the door), there’s no reason not to go. But you ought to reserve early: word is getting out. Maybe I ought to change my byline to Opera Deal Hunter.