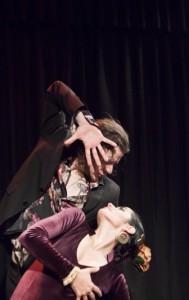 The first clue of the unconventionality to come was the eclectic musical troupe. Violinist Víctor Guadiana sported a Mohawk; one of the two female singers wore deadlocks. Though her heartfelt singing straddled tradition, her wails and cries screamed defiance. The Norwegian guitarist Bettina Flater stood out for just being female. Apparently, only one other woman makes professional rounds in Spain. It’s not often I can identify a particular Flamenco tune, but I immediately recognized the words of popular Cuban singer Silvio Rodríguez. His inclusion suited the rebelliousness of the evening. Rodríguez leans Left. Revolutionary politics inspire many of his lyrics.

The entire company, including director and choreographer Karen Lugo and her dancing partner José Maldonado, exuded fresh-faced energy. Maldonado has a cutie-pie face, and at times seemed to be dressing up as sexy. Guadalajaran-born Lugo is something of a star in Spain. Her elegant beauty and powerful grace are enough to catch your attention, yet it’s her desire to blaze modern Flamenco trails that has marked her as one to watch. In one scene, she’s wearing black, tight pants, moving in and out of the spotlight at the corner of the stage accompanied by silence, pinning her hair and attaching earrings. It’s not your typical number, though her moves seem rooted in traditional Flamenco repertoire.

Lugo’s “The DeMente Territory” moves Flamenco a bit out of its comfort zone, while allowing its most exciting qualities to flourish: the rapid, stomping feet, facial expressions oozing with emotion, delicately sculpted arms and hands. It’s in the in-between spaces where Lugo explores abstract, modern movement, theatrical concepts and genre-blurring style. Unexpected if you haven’t previously seen her work, these experimental add-ons are hard to swallow. But Lugo’s free-flowing edginess might earn Flamenco a new following.

My favorite part of every Flamenco show is after the bows, when the entire company – dancers and musicians – form a half-moon and take turns freestyling in the center. It’s during this improvisational session that the personalities of the players break free. Guitarist Flater attempted a few stomps, but it was the spunky steps, high heels and all, of the dreadlocked singer that perfectly summed up the spirit of the show. Tradition is lovely, but oh what fun it is to dabble with a few contemporary strokes.