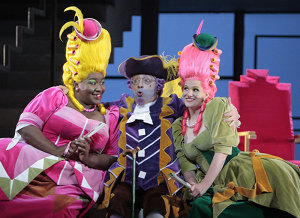 Don Magnifico (Alessandro Corbelli) is confident that one of his daughters (Ronnita Nicole Miller, Stacey Tappan) has caught the prince's eye. / Photo by Robert Millard

One of the pressing tasks of a modern opera company is to figure out how to put younger fannies into their seats as the Geritol generation gradually fades away. In the case of LA Opera, they can’t fail to notice that their elephantine competitor for entertainment dollars across town, Hollywood, has done pretty well attracting youth by serving up recycled stories with a proliferation of CGI effects, rapid cross-cutting and lots of explosions — perfect for today’s abbreviated attention spans. Hmmm… what to do? Well, the current production of Rossini’s Cinderella is certainly one way to get the job done. With goofy styling and flights of fancy that evoke vintage Disney and Dr. Suess, it may be just the thing for parents trying to get their kids interested in opera.

The opera, however, is not kid stuff, but a top-notch dramma giocoso (jocular drama) that the 25-year-old Rossini wrote in three weeks. Coming only a year after The Barber of Seville, Cinderella (La Cenerentola in Italian) showcases a master composer at the height of his powers, and the proof is in the self-assured music and witty libretto.  Just as he had for The Barber, Rossini turned to earlier French sources for his story (in this case the 1697 story Cendrillon by Charles Perrault), but he made it unmistakably his own.

This production has been making the rounds. It was originally a co-production of the Houston Opera with three European opera companies and played most recently in Seattle in January. The singers and conductors change with the venues, but the director, Joan Font, the scenery and costume designer, Joan Guillén, and the lighting designer, Albert Faura, seem to be constants in each production since the inception in 2008.  It’s easy to see why: Their contributions set the memorably colorful visual tone of the production.

Faura cleverly uses different color lights and projected grids to suggest different rooms, while the elements of the simple set (a chimney breast, staircase and balcony) are accented by furnishings that look as if they fell out of a pack of Lifesavers. But it’s really the costuming that makes you wonder whether you’ve been transported to some kind of alternate Disney-fied universe. In the first act, when the Prince’s retinue arrives dressed in yellow, brown and coral suits, wearing blue wigs, you almost expect them to break into a chorus of “Be Our Guest.” The evil sisters, cavorting about in their bloomers with pink and yellow beehive hairdos, look like some kind of creation by Cake Boss gone terribly wrong. It’s all quite outlandish, and that is the point.

Such strong visual stimuli run the risk of becoming tiring, but the excellent singing keeps the opera on track. The role of Angelina (Cinderella) is split during this run between Kate Lindsey and Ketevan Kemoklidze. I saw Kate Lindsey and was impressed by her coloratura technique. In particular, her flawless runs of staccato 16th notes established her cred as a true diva di fioritura (embellished singing). The other notable singers were René Barbera, offering a piercing, hall-filling tenor as Don Ramiro, and Nicola Ulivieri as Alidoro, whose baritone voice projects forcefully throughout the theater. Alessandro Corbelli, as Don Magnifico, gives a fine comic performance, his stout pint-sized stature adding to the sense of his self-important ridiculousness. To my mind, the two songs featuring, respectively, four- and five-part harmonies are especially compelling, some of the best such larger ensemble work in all of opera.

Although Rossini’s version of Cinderella dispenses with the glass slipper, fairy godmother and other magical notes, the creators of this production have slipped some of that fun stuff back in. A giant mirror descends from the ceiling, with revolving partitions that ultimately reveal a giant painted coach as Angelina sets off for the ball. This is followed by the procession of a miniature carriage that runs behind a sheer fabric on the balcony and down the stairs, strongly backlit to produce a mesmerizing lightbox effect. Finally, half a dozen “mice” (actors with cone snouts) scurry about throughout the opera as a kind of comic relief and facilitators for Angelina. I guess it’s the closest they dared come to having a Disney-style wisecracking little animal as Cinderella’s sidekick.

As usual, the music, conducted by James Conlon, is faultless. It is nice to have a harpsichord as the continuo to provide a sparkly sprinkling of that late Baroque flavor that underpins the bel canto style. So bring the kids, bring your neighbors, bring anybody — all are bound to enjoy this lighthearted operatic confection.