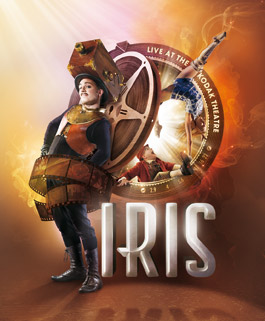 Maybe somewhere out on the Tartar Steppe, there is a lonesome goatherd who has not yet heard of Cirque du Soleil, but virtually everywhere else this producer of theatrical extravaganzas is rapidly becoming a fixture of 21st-century world culture. Iris is the latest offering from the Montreal-based troupe, and is the first to have a permanent home in Los Angeles, taking up residence at the Kodak Theatre on Hollywood Boulevard. Considering the show’s theme of film, it’s an appropriate place for the show, and the producers have bet on the longevity of the show by spending a whopping $100 million to renovate the theater as well as reconfiguring it by removing about a third of the seats.

While the grand processional leading up to the Kodak is somewhat less than inspiring, once inside the theater, the visuals improve dramatically. The stage has a decidedly Belle Epoque steampunk-meets-sideshow feel to it with huge yawning clown faces bookending each side. As the hall fills and theatergoers find their seats, outlandishly dressed cast members roam the aisles, camping it up, providing a wry foretaste of what is to come. Particularly amusing was a Betty Boop-type character wearing black-and-white stripes and a thick leather corset to which was attached a revolving drum/skirt encircling her waist that acted as a sort of Zoetrope, revealing an animated scene as she spun the device round and round.

The show proper is divvied up into about a dozen set pieces, halved by an intermission. As is typical with Cirque productions, there is a loose storyline, in this case involving a nerdy Harold Lloyd-style character who yearns for romance with an ingenue who later becomes a movie star. Most of the show is presumably a spin through the fantasy world that he creates in his mind. It is the loosest of narrative frames upon which to hang the real purpose of the show: a nonstop montage of acrobatics, kinetic movement, and general visual overload.

Highlights of the scenes include: cameras, lights and film canisters animate to become dance partners to human characters; a pair of identical twins use the entire vertical space of the theater to perform soaring aerial feats; Chinese acrobats in strange teletubby-esque costumes bend their spines nearly in half; film characters like Barbarella, Tarzan, Spartacus and Hopalong Cassidy flit about the stage during an insane PitchFest; gang members duke it out “West Side Story”-style on trampoline-rigged rooftops against a nighttime Manhattan skyline. It’s mostly all great fun and a truly impressive spectacle.

Each Cirque du Soleil show has something unique about its stagecraft and Iris is no exception. Acrobatics aside, the best conceptual bits involve roving cameramen who record clips of live action as it is unfolding; these images are then projected, often delayed, layered and distorted, onto background scrims, with which live characters then interact. In certain scenes this time- and shape-shifting technique is nothing less than mesmerizing for its beauty and technical elegance, while in others it is used humorously. The beginning of the Film Noir sequence has another wonderful bit of stagecraft with four scrims (top, bottom, left and right) moving simultaneously to reframe a series of apartment windows in a nighttime symphony of menacing drama. Kudos to writer/director Philippe Decouflé, a Paris-based film and stage director, and artistic director Denise Biggi.

Another noteworthy element of the show is the music. Composed by Hollywood film scorer extraordinaire Danny Elfman, it is performed live by computer techs, a percussionist, a cellist, a violinist and even a sitarist situated in the boxes at each side of the theater, providing yet another layer of sensual stimulus. The score lends just the right mix of whimsy, plaintive emotion, and drive to make a superb accompaniment to the visual hijinks of the other performers.

Technically still in previews with an official opening of Sept. 25, Iris has a few glitches — a couple of missed acrobatic moves, a scene or two that went on too long — but these no doubt will be sorted out, and overall it is a worthy inclusion into the canon of Cirque du Soleil spectacles. It is the kind of show where you will say to your companions afterward: “Now that was money well spent!”