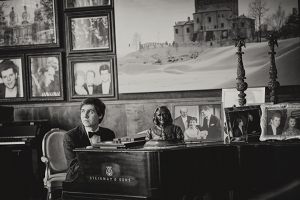 On Tuesday night, in the first concert of the 2013-2014 Cliburn Concert Series, Vadym Kholodenko made his eagerly awaited recital debut in Ft. Worth, Texas, since taking home the gold medal in the Van Cliburn International Piano Competition in June. If the audience was expecting a recital full of pianistic fireworks à la Lang Lang or Yuja Wang, they might have been disappointed. If, however, they were expecting, or hoping, to hear a young pianist display a sublime musical technique, then they got their money’s worth.

Performing in Ft. Worth’s beautiful classic-European-style theater, Bass Performance Hall, where he first wowed both audiences and jurors in June, Kholodenko performed a program consisting solely of Russian music, sort of. The first half of the recital was devoted to a single work, the Piano Sonata No. 7 in E minor, Op. 25, “Night Wind,” by Nikolai Medtner. And the second half included several short transcriptions by Rachmaninoff of compositions by Bach, Schubert, Mendelssohn, Tchaikovsky and Kreisler, with one piece by Rachmaninoff himself, all of which, as the program notes indicated, he often played as encores in his own recitals. Indeed, the second half seemed like a series of piano encores.

Predictably, the audience reaction to the Medtner was somewhat muted, partially because the piece was unfamiliar, but also because, despite the technical demands on the soloist (Medtner himself was a renowned piano virtuoso during the first decades of the 20th century), and some interesting passages, the piece was rather boring, at least compared with, say, a piano sonata by Medtner’s contemporary, friend and mutual admirer, Rachmaninoff. Not only that, but as the subtitle suggests, the Medtner sonata is a somewhat introverted piece lacking in the kind of bombastic playing required of other pieces Kholodenko might have chosen. As such the piece demands that the audience listen to a 35-minute-long, somewhat rambling and unfamiliar piece of music. One thing was clear though: Kholodenko’s playing was exceptional. And the fact that he selected this piece suggests that he feels a personal connection to it.

The real gem of the evening was the Rachmaninoff transcriptions. As he played them, one could almost imagine the piano rolls of Rachmaninoff himself playing. But Kholodenko played them even more introspectively than Rachmaninoff. The transcriptions themselves showcase the beautiful melodies of the original compositions with Rachmaninoff’s distinct stamp on them. With Kholodenko’s sensitive rendering, the combination was breathtaking.

The unusual program with its introspective slant seemed to fit Kholodenko’s onstage personality. He walked with the gait of a much older performer, with hunched shoulders, and did not smile even when receiving the applause and cheers from the audience. Rather than appearing to be there to please the audience, he seemed to be playing solely for himself, and the audience just happened to be there.

What Kholodenko’s choice of selections lacked in rousing the audience, more than made up in demonstrating a highly refined pianistic skill that placed the music above the technique, even though the technique was sublime. Watching Kholodenko on the convenient overhead screen in Bass Hall that enabled the entire audience to see his hands, it was often difficult to see his fingers actually strike the keys. For most of the recital, his hands hovered so closely over the keyboard, it was hard to believe that he could actually strike the keys loud enough to be heard. Unlike a slew of young pianists intent on banging the keyboard hard enough to break it, Kholodenko was more concerned with conveying the subtle musicality of the works. Indeed, he is able to play rapid passages so deftly and quietly that it almost seems to defy physical laws.

After the predictably showy Variations on Carmen by Vladimir Horowitz as his first encore, Kholodenko returned to the more muted atmosphere with his final encore, the Éntincelles, Op. 36 No. 6, by Moritz Moszkowski.

On Tuesday night, we got to see and hear what the audience and jurors alike saw and heard back in June: Vadym Kholodenko is a pianist who at the age of 27 already possesses both extraordinary technical skill and great musical understanding.

For more about the Cliburn Concert Series, please visit www.cliburn.org/cliburn-concerts/.