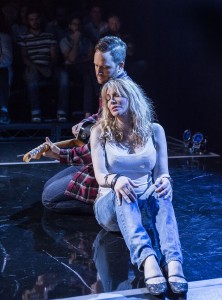 There will always be great love stories. Some carry an eternal flame and others tragically burn out. As much as we try to package these emotional sagas into a narrative, the memories come in and out of focus — blurring the past with a nostalgic haze that distorts what really happened. In the aftermath of lost love and broken hearts, there’s detritus of confusion and the pressure to follow the old adage of “moving on.”

But theater’s affair with romance is enduring, too involved to simply “move on” or forget. The stage becomes a therapy session where hopeless romantics seek answers. And the only way to unveil the truth is something Courtney Love knows all too well — you have to “live through this.”

This one-hour show stars the legendary rebel and quintessential ’90s rock goddess, Courtney Love, alongside the playwright and notable composer, Todd Almond. They play star-crossed lovers whose paths intersect once again when Almond’s character discovers, while watching the evening news, that Athena (played by Love), his girlfriend of a bygone era, was suddenly found dead. A wave of despair washes over him as he is sucked into a black hole of piecing together their turbulent relationship.

Channeling his pain into the piano, this tribute resurrects his one-time love into a ghostly hologram. Love confidently struts down the stage in a pair of hip-hugger jeans (she pulls them off). Her milky skin and platinum hair look angelic under the Vegas-styled LED paneled lighting (note: this is how you make a comeback).

Almond is anxious to walk down memory lane, pulling Athena back to her hometown in the hopes of rekindling their cosmic connection. It’s clear that the love they shared many moons ago was pretty powerful — their tunnel vision and magnetic body language prove that.

Athena is amused by Almond’s heartfelt acoustic ballads, but knows their love was just a phase, the first chapter in her memoir that was destined for something bigger than Kansas. Like all cool girls, she wanted the bright lights and big city. Trading her boyfriend for a one-way ticket to New York, she abandons Almond in Kansas. This leads him down a trip of unhealthy hedonism in which he rebounds with any knock-off Athena in his path. Cue the “Sirens,” the gang of women performers that seductively sing and dance in distracting circles around the lovers.

Sam Pinkleton, the choreographer, deserves mention. His understanding of rhythm is effortless, but is strategically executed with the precision of a drill team. Dressed in skin-tight all-black club-wear, the Sirens represent the adultery lurking on the edge of monogamy. Electronic music blares to a crescendo, and they swarm around Almond like Britney Spears’ backup dancers. It’s intense, but for some reason, this doesn’t feel right to the small-town boy. These girls are not “his girl,” Athena.

Almond runs back to his bedroom, a safe haven where he daydreams of Athena. Some of the songs are performed with such unfashionable enthusiasm that you’d think he was trying out for “American Idol.” But you have to give it to him, he’s genuine, and the songs are catchy in that sing-along musical theater geek way.

Here is where the conflict lies. Athena got out of dodge and he didn’t. She’s already seen it all, and to go back to this pit stop of a town would be regressive. Love beautifully projects this sentiment in her voice. It’s a little more mature now, like a raspy Marianne Faithful, but she still has the power to induce goosebumps with her viscerally charged anthemic voice we have come to know her for.

The powerful performances carry the show, while the stage is minimally set with only a piano. Lighting features a slew of LED panels, that seems conceptually undeveloped and bleak compared to the fantasy transpired in the acting and musical score, making me feel like I was at a $10 cover bar that was bound to disappoint. It’s not that bad, but like they say in an art critique, “I wanted to see it pushed further.” Seating is adjacent to a catwalk-like stage that’s designed to immerse the audience in the action — a really up-close and personal viewing that feels like the only way to experience this odyssey.

Be prepared, you might want to feign away from attending this with a first date like I did. Watching this love story surfaced all the “what if” possibilities of past loves. But that’s in the past. It’s one for the memoir.

“Kansas City Choir Boy,” continues through Nov. 8 at Center Theatre Group’s Kirk Douglas Theatre, 9820 Washington Blvd., Culver City 90232. Show times are Tuesday through Friday at 8 p.m.; Saturday at 5 and 9 p.m.; Sunday at 3 and 7 p.m. Ticket are $25-$70. Tickets are available online at www.CenterTheatreGroup.org, by calling CTG Audience Services at (213) 628-2772, in person at the Center Theatre Group box office (at the Ahmanson Theatre at the Music Center in downtown Los Angeles) or at the Kirk Douglas Theatre box office two hours prior to performances. Hot Tix: $25 each may be purchased in advance or, subject to availability, on the day of performance at the box office (no checks).