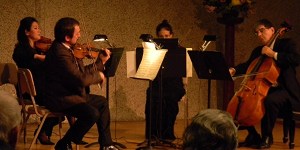 Classical music, in case you haven’t read the obituary published by Slate earlier this week, is dead. But before we gather the dearly beloved to light a candle and say a prayer, there’s one problem: The deceased is still very much alive — and looking spry.

Is this the greatest comeback since Lazarus? Or was the article in question yet another case of a writer seizing upon a polemical topic not for the sake of contributing any genuine insight and solutions, but merely to rile up the Internet and generate those sweet, sweet page hits?

While you sit and think about that one for a bit, allow me to turn the spotlight on the Crown City Quartet and, by extension, the thriving chamber music scene in Southern California.

Comprised of Ralph Morrison (violin), Isabelle LaForet Senger (violin), Carrie Holzman-Little (viola) and Dane Little (cello), the Pasadena-based Crown City Quartet has been around since 2007, performing mostly in Southern California and Oregon. It somehow has managed to elude my attention all these years until now. Which says just as much about me — where have I been all this time? — as it does about the sheer number of chamber music groups and societies one needs to keep track of these days. Sprouting up in prolific numbers across the region, it’s getting to the point where finding quality chamber music in Los Angeles is about as easy as bumping into a taco truck.

On a busy Saturday night (Feb. 1), where just down Colorado Boulevard the clubs and bars were thumping and writhing with people, the quartet’s program of Haydn, Shostakovich and Brahms at the first of the Pasadena Presbyterian Church’s “Friends of Music Concerts” was easy to miss. That it was a free concert and not held in a tony downtown Los Angeles venue might also have prompted the unwitting to take a pass on it. But stumbling upon concerts like these is one of the small joys that light up my listening life. I love searching them out, tucked away as they often are in unassuming or unusual venues that one wouldn’t think of looking into. Concerts like these usually attract little to no press, lacking the sex appeal that promoters so desperately try to slather classical music with nowadays.

Which brings me again to the Crown City Quartet.

The opening chords of the Haydn String Quartet in D, Op. 20, No. 4 drew open the veil of the first movement with all the gentle radiance of the first rays of morning sunlight. Unforced, warm and keenly alert to Haydn’s whimsy, their performance evinced not only a delight in the music itself, but delight, too, in their own music making.

Those qualities carried over into Shostakovich’s String Quartet No. 1 in C from 1938, which was composed shortly after his epochal Symphony No. 5 and the birth of his son Maxim. His first essay in the string quartet genre, it has an artless, beguiling innocence wholly unlike the anguish and dramatic power that characterize its successors. Clouds darken the work’s spotless blue sky in rare moments, such as in the folk-like second movement, “Moderato,” but are quickly dispersed. Playing the quartet with a light, easy-going touch, the Crown City Quartet managed to adroitly underline the score’s mood of childhood reverie without becoming cloying.

That ease with which the quartet can express sentiment without lapsing into sentimentality was best showcased in the final performance of the night. The Brahms String Quartet No. 2 in A minor was rich, smoky, heavy with nostalgia. Its textures were rendered with limpid gracefulness, never allowed to become soggy as Brahms often can be. Nor was it dry, bereft of expression. It was a performance that felt old-fashioned in the best way: genuinely and unapologetically Romantic in the best of the Central European tradition.

None of this is to say, however, that classical music doesn’t have serious problems today. It certainly does. But music, to say nothing of that existential need to make it and hear it, will survive and likely outlive us all, and then some.

And for every cynical prophet of doom claiming otherwise, there will be musicians like the Crown City Quartet, whose performances are a more eloquent rebuttal than anything the talking heads of the Internet can ever muster.

Ted Esteban Ayala Villaroel is a writer and musicologist born and raised in Los Angeles. Since the age of 12, he has been obsessed with classical music. Among his other passions are literature, Latin American cultural and political affairs, Japanese culture of the interwar period, retro video games and cats. You can follow him on his Twitter: @Write_Said_Ted.