Review: Daniel Harding and Emanuel Ax With the LA Phil 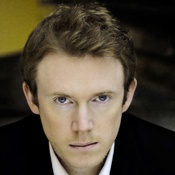 Apparently, there are a lot of very promising young conductors on the classical music scene; and the LA Phil certainly knows how to recognize and find them (think Esa-Pekka Salonen and Gustavo Dudamel). One of these young conductors is the 40-year-old British conductor Daniel Harding who returned to LA this past weekend for a series of concerts with the LA Phil featuring works by Berlioz, Franck, Boulez and Schumann.

Harding opened the concert on Saturday night with a statement in the form of a performance of Le corsaire (Overture) Op. 21 by Berlioz. Berlioz starts the piece right out of the gates with the marking of a very fast Allegro assai, so much so that the orchestra almost seemed caught off guard. But, of course, we’re talking about the LA Phil; and they kept the frenetic pace that lasted the 30 bars of the introduction. However, that makes the Adagio 30 bars later seem even slower, and Harding took full advantage and had the orchestra play it almost hymn-like. But after only 23 bars, Berlioz returns to the Allegro and from there on out there are some dynamic and tempo fluctuations, but basically the feeling is one of an increasing momentum and crescendo to the concluding C major chord.

The first half concluded with the Symphonic Variations for piano and orchestra by César Franck with LA favorite Emanuel Ax at the keyboard. With the minor exception that the orchestra sometimes overshadowed Ax, it was a wonderful performance, and Ax once again showed why he is an audience favorite. He doesn’t care about fashion or flashy movements. Nor does he try to impress with his technique, which, by the way, isn’t about playing fast. Ax’s technique is pianistic, not acrobatic, and his musicianship is impeccable. Not only was this evident in the Variations but also in his encore of Chopin’s Waltz in A minor, Op. 34, No. 2, which is not a flashy piece. Ax played it so beautifully and with just the right amount of melancholy, without being maudlin, that there wasn’t an extraneous sound in the hall.

As everyone who reads this probably knows by now, the legendary composer and conductor Pierre Boulez died this past week at the age of 90. If you attended the LA Phil concert this past weekend you couldn’t be blamed for thinking that the orchestra programmed Boulez’s Mémoriale at the last minute as a tribute to him. But that wasn’t the case. In what can best be described as an eerie coincidence, the piece was programmed at the beginning of the season. Also, as the audience returned from the intermission, they couldn’t be blamed for thinking that they had returned too soon as there were only eight musicians on stage. But a closer look revealed that the two horns and six string players were not in their usual position. After the audience was seated, both Harding and Russian flutist Denis Bouriakov, who until November was the principal flutist for the New York Metropolitan Opera Orchestra, but is now the new principal flutist for the Phil, strode on stage for a performance of Boulez’s Mémoriale.

Mémoriale, a tribute to Canadian flutist Lawrence Beauregard, who worked with Boulez in the 1980s and who died prematurely at the age of 28, was the final iteration of a long series of versions beginning with the original one in 1971 that was a tribute to Stravinsky. The piece is primarily a vehicle for the flute with muted strings and horns, which are so muted that they are almost imperceptible. At only eight minutes long, it sounds atonal, but there are hints of tonality. Boulez would have approved of Bouriakov’s performance, which was restrained, like the piece, but still expert.

The concert concluded with Schumann’s Symphony No. 2 in C major, Op. 61. The Schumann second symphony, like his first and third symphonies, belies the troubled life he lived. Like many other composers (Beethoven comes to mind), Schumann lived what can only be described as a deeply painful life, which ended in an institution after a failed suicide attempt; but much of his music is bright and cheerful and, well, optimistic. And the second symphony is no exception.

On Saturday night, Harding and the Phil played the symphony majestically, starting with the stately Sostenuto assai, which opens the first movement, and ending gloriously in C major in the fourth movement. The audience on this particular night clapped between movements, and although Harding should have immediately started the fourth movement right after the conclusion of the third, he had to start up while some audience members were still clapping. No matter. He and the orchestra delivered a captivating performance.