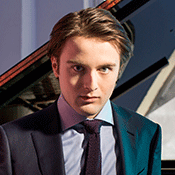 I am going to join the chorus of others who have proclaimed the 25-year-old Trifonov the next great Russian pianist in the tradition of Horowitz and Richter. In fact, he may be the next great pianist period.

Of course, even at the ripe young age of 25, Trifonov comes with impeccable credentials, having won medals at three of the most prestigious piano competitions, including the Chopin (third prize), the Rubinstein (first prize), and the Tchaikovsky (also first prize), all at the age of 20.

On Friday night, he played a monster program not for the faint of heart or the fidgety. The first half alone, which lasted an hour and 10 minutes, included the Brahms Chaconne in D minor for the Left Hand (after Bach’s famous Partita for Solo Violin), the Sonata in G major, D. 894 by Schubert, and the Brahms Variations on a Theme by Paganini, Op. 35, Book 1. The second half consisted of a single work, the Sonata No. 1 in D minor, Op. 28 by Rachmaninoff. The musical and technical demands of his program were immense, and the demands on the audience were, in a different way, also significant.

With the beginning notes of the Brahms Chaconne, Trifonov brought the audience under his magical spell, which lasted until the concluding notes of the Rachmaninoff. In the very demanding Chaconne, Trifonov somehow allowed all the melodic lines to be heard, not an easy task with the left hand playing everything. Brahms held Bach’s masterpiece, one of the towering musical compositions of Western music, in the same high regard as many others, and wanted to create for the piano what Bach had created for the solo violin. He saw composing it for the left hand alone as the only way to approximate it. Trifonov certainly realized Brahms’ ambition.

Trifonov’s Schubert was a thing of beauty. The sonata itself is almost pastoral and serene, and seemed even more so sandwiched between the Brahms Chaconne and Paganini Variations. Schubert never intended his piano and chamber music to be played in concert halls. Rather this music was performed in his famous salons for small groups of friends and acquaintances and for the musicians themselves. And even though Trifonov was performing in front of a few hundred people, it was clear that he was playing for himself as well, as if he were alone. At times his playing was so subtle and quiet that one had to strain to hear the notes. It is a tribute to the acoustics in Disney Hall that the audience was able to do that, but it also placed huge demands on their attention. At the conclusion, the audience gave Trifonov a standing ovation, and when he returned to play the Brahms Paganini Variations, he launched into it before the applause for the Schubert had stopped, giving it the feeling of an encore.

As serene and introspective as the Schubert was, the Brahms was an in-your-face workout for the piano. Brahms threw every demanding pianistic technique in these variations and as able as Trifonov was to render the subtleties of the Schubert, he was also able to explode the fireworks of the Brahms. It was as if he were possessed by Brahms.

After a short intermission, Trifonov returned to play the Rachmaninoff, and, once again, the audience witnessed an inspired performance of an incredibly technically and musically demanding piece. At times Trifonov combined speed and pianissimo playing. Trifonov’s introspective approach once again was revelatory, and the audience rose to their feet in appreciation.

Even though Trifonov had just spent almost two hours playing some of the most difficult music in the piano repertory, the adoring audience brought him out for three encores. His first encore, the Silver Fairy from Act 3 of The Sleeping Beauty, Op. 66 by Tchaikovsky arranged by Pletnev, was the antithesis of almost everything he had played. It was whimsical and showed a more lighthearted and humorous side of the young pianist. His second encore, the Prelude for the Left Hand, Op. 9 No.1 by Alexander Scriabin, would have been a fitting conclusion to the evening as it would have come full circle from the Brahms’ Chaconne. But Trifonov wasn’t done yet, and even though some in the audience had left, the ones remaining wanted more. So, Trifonov returned to play another Paganini Variations, this time the Paganini Etude No. 6 by Lizst. When he exited the stage for the final time, he released a sigh of exhaustion. Yes, even a 25-year-old wunderkind can get tired.

During each piece, Trifonov wasn’t concerned with performing or showing off technique; he was concerned only with making music. That’s not to say that he doesn’t have the technique. He showed that in all the pieces, but especially the Paganini Variations and the Rachmaninoff sonata. Trifonov’s interpretations showed a pianist and musician mature way beyond his 25 years. The evening was truly a revelation. Unlike other young pianistic stars who get caught up in the fruits of success and celebrity, Trifonov seems very grounded in the music. Failing any bumps in the road, Trifonov should continue his ascent to the pinnacle of living pianists.