Review: ‘Dates and Nuts’ at the Bootleg Theater 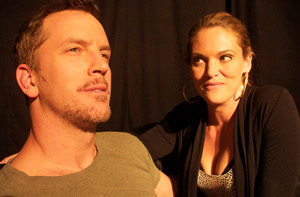 The logline for “Dates and Nuts” reads as follows: “An animal rights activist searches for love in the jungle of New York City.” Not exactly an original premise, but in the right hands, it could be a hoot. As it turns out, a combination of assured writing, believable acting and good direction adds up to a qualified win for this romantic comedy at the Bootleg Theater.

The play opens with two young women seated on a stoop, watching the world (mostly meaning hot guys) go by. With heavy Brooklyn accents, giant hoop earrings and skintight outfits, they are a familiar stereotype of working-class Italian girls from the boroughs. But that’s okay because the actresses pull it off convincingly. You have to have lived in New York for a while to get the nuances right, and both actresses have and do. The star, Eve (played by Elizabeth Regen), comes on strong from the get-go and almost overpowers with her brash and crude manner. But as the play unfolds, we get to see the humanity and vulnerability inside her. Ultimately, she is just plain fun to watch.

Playwright Gary Lennon has produced a few prior plays, but is primarily known as a television writer (“The Shield,” “Justified,” “Orange Is the New Black”). The TV sensibility reveals itself quite clearly in the episodic nature of the action, the dramatic beats, and especially the fast and easy resolution of the conflicts. That’s not necessarily a bad thing: the TV rom-com formula is comfy and familiar and guarantees laughs when the writing and acting is competent, like it is here. The novelty is having such a script loaded with frank and sometimes-raunchy sex talk and featuring a sassy black transvestite as comic relief — it’s definitely not something you’ll find as a summer replacement for “The Bachelorette.”

There are a couple of false notes, though. Eve’s love interest, Al, comes off more like a sensitive Oregon lumberjack than the updated “Saturday Night Fever” kind of guy you would expect Eve to go for. Also, the action flags in a few places, such as when Al and Donald, an obvious Mr. Wrong, meet in a bar and decide to have a deep (and boring) conversation about relationships.

On the plus side, there is an effective red herring that keeps up the tension by making us think Al could be just another Mr. Wrong. But like all proper sitcoms, everything is tied up pretty with a bow by the end.

All told, it’s an entertaining evening out, and the venue itself certainly adds to the fun. The Bootleg Theater inhabits a rather desolate stretch of Beverly Boulevard near downtown, but once you enter, it feels like you have discovered a cool little speakeasy. There’s a divey bar where you can buy all manner of adult beverages to take into the theater, as well as a stage where bands play on certain nights. And this explains why the play begins at the unusually early hour of 7 p.m. — so the band can get rocking by 9:30. There’s even a gallery/event space tucked away on one side. So, my advice is to go for the play, and stay on for the after-fray.