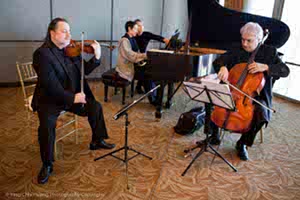 One of the best-kept secrets of the LA classical music scene is not so secret anymore. I’m talking about Le Salon de Musiques, held monthly from October through April on the fifth floor of the Dorothy Chandler Pavilion.

Le Salon harkens back to the days of Schubert, before chamber music musicians played in concert halls, when they would gather at someone’s home and perform for friends and family, and each other.

In fact, that is just how founder and artistic director François Chouchan views Le Salon: as a family affair. At the beginning of the concert on Sunday, the sixth of the eight programmed for the series’ third season, Chouchan, an accomplished musician in his own right, said that his aim is to program pieces that are emotional, melodic and harmonic and that “touch the heart.”

The three works featured on Sunday’s concert, by two of the greatest and most well-known French composers — Debussy and Ravel — certainly accomplished those aims. The pieces included the Debussy Cello Sonata in D minor (with Andrew Shulman on cello) and Violin Sonata in G minor (with Phillip Levy on violin), and the Piano Trio in A minor by Ravel. The pianist on all three works was Rina Dokshistky. All three works were composed within a very short time frame between 1914 and 1917, the year that WWI ended.

Chouchan told the full house on Sunday that, in France, the music of the French Impressionists is associated with the arrival of spring. And the audience could well understand that on Sunday, a warm, sunny spring day. Julius Reder Carlson, who gave an informal pre-concert talk, informed us that, in actuality, Debussy and Ravel preferred to be called Symbolists, rather than Impressionists. Carlson, a Ph.D. in ethnomusicology and a doctoral student in musicology at UCLA, is Le Salon’s resident musicologist.

The concert began with the cello sonata by Debussy. Shulman said of the sonata that it was subtitled “Piero Angry at the Moon” and is played like a character on stage with sudden movements meant to make the audience jump out of their seats, which was certainly the case that day, especially in the second movement with its frequent stacatto pizzicato sections, which Shulman and Dokshistky accentuated even more for just such an effect.

As with all Le Salon concerts, immediately following the cello sonata, the musicians switched places quickly, with Levy replacing Shulman for the violin sonata by Debussy, the last work written by the composer who died in 1918.

Both the violin and cello sonatas are very brief works, not lasting more than about 13 minutes. But one should not equate brevity with simplicity. Both works are imaginative and surprisingly modern in their tonality (containing their share of dissonance) and scoring; and both require a high level of technical expertise by the players, which Shulman, Levy and Dokshistky clearly brought to the table.

Compared to the sonatas by Debussy, the piano trio by Ravel, although written a year earlier than the cello sonata and by a composer 13 years Debussy’s junior, is very melodic, epitomizing sensitiveness and emotion. In fact, the Trio is traditional in many ways: it comprises four movements with the first and fourth movements in sonata form surrounding the second movement which is a scherzo and trio. The third movement is a passacaglia (a form used by Bach and by Brahms much later). Ravel said that, “We should always remember that sensitiveness and emotion constitute the real content of a work of art. ” And there are passages — especially in the first movement, Modéré, when the cello and violin exchange phrases leading both times to a recapitulation of the main theme — that are downright heart wrenching.

Levy, Shulman and Dokshistky seemed transformed themselves by the intense beauty of the Ravel, which they conveyed to the completely captivated audience with incredible, heartfelt feeling and sensitivity. Ravel would have approved.

Le Salon is a special experience. There is something extraordinary about being a few feet from a musician and his or her instrument that changes your perception of the piece and draws you into it. As if the musical experience wasn’t enough to get you down to the Dorothy Chandler Pavilion on a Sunday afternoon (remember that there is also often very little traffic), after the concert the audience gets a chance to talk to the musicians (the portion of the afternoon titled La Conversation) while sipping on very nice French champagne. Then everyone gets to talk with each other over gourmet sandwiches and desserts provided by Patina restaurant.

All in all, Le Salon is a unique and intimate musical experience in a city where intimacy is sometimes difficult to find.

The next concert is scheduled for April 14 at 4 p.m., and it promises to be very special. The Consulate General of the Federal Republic of Germany in Los Angeles helped Chouchan to locate a hard-to-find copy of German composer Camillo Schumann’s Cello Sonata in C minor, Op. 99, which will see its U.S. premiere at Le Salon de Musiques. Also on the program for that concert are: Chopin Cello Sonata, Op. 65, in G minor and F. Delius Romance for Cello and Piano with Shulman on cello and Steven Vanhauwaert on piano.