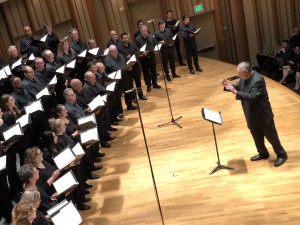 In a recent interview, Tigran Mansurian said he considered himself a musical “grandson” of Dmitri Shostakovich, the doyen of Soviet composers during the mid-20th century. As with his friends and colleagues Alfred Schnittke, Arvo Pärt, Andrei Volkonsky and Edison Denisov, among others who stood at the head of the post-Shostakovich avant-garde in the former Soviet Union, Mansurian’s music bears the imprint of the elder composer’s art. Yet each of these artists, unlike earlier generations of Soviet composers, managed to absorb his influence without becoming his epigones.

Dilijan Chamber Series demonstrated this with their typical blend of eloquence and verve last Sunday afternoon in their 80th birthday tribute to the composer. Assembling a program of scores which spanned the period since Armenia’s independence, the concert was not only a tribute to the life and work of one of the most eminent composers alive today, but also an exhibition of how the composer developed his mature idiom by way of embracing the musical roots of his homeland.

Shunning the brilliant exoticism of the “folklorist” style that held sway over the various Soviet republics, Mansurian instead made Komitas Vardapet, as well as Armenian liturgical and folk music the keystone of his art. It is this quality which imbues it, however dark the depths it may plumb, with the enduring light of hope and acceptance.

His poignant Agnus Dei from 2006 serves as a case in point. Composed of three movements which each have a single melodic line broken up amongst clarinet, violin, cello and piano, the score floats overhead ethereally, poised delicately between this world and the hereafter. The grouping of clarinetist Boris Allakhverdyan, violinist Movses Pogossian, cellist Michael Kaufman and pianist Steven Vanhauwaert left one’s breath practically suspended for the duration of the performance. Only a few composers alive today can match Mansurian’s unerring ear for diaphanous timbral combinations that are both moving and seductive. None surpass him.

The broad palette of tone colors he is able to wield employing only viola and vibraphone in his Three Medieval Taghs, which Kim Kashkashian and Jonathan Hepfer played with a naturalness as if the music had been spontaneously improvised, are a veritable textbook for younger composers to draw inspiration from. Mansurian here displayed his mastery of gesture, an economy of expression that has no place for artifice.

His wiry String Quartet No. 3 from 1993, the earliest of his scores on the program, stands athwart a watershed in the life of the composer and his people, having been composed shortly after Armenia’s independence. Broken shards of folk-like motifs bare the glint of their edges at the listener, occasionally being smoothed out by moments of repose that look forward to Mansurian’s later style.

But it was his choral masterpiece Ars Poetica, which the Lark Geghart Choir under Vatsche Barsoumian dispatched with unsettling intensity, that most powerfully seared itself into the listener. A weighty rumination on the passing of time and inevitable death, on the transience and beauty of life itself, Mansurian’s music fuses into the verses by Yegishe Charents that it sets into an organic whole. Here composer and poet become extensions of each other, threaded by a cosmic filament spanning the chasm of time, which they both extend to the listener, inviting them into their artistic communion.

There is a strong sense of the stoic in this mighty score, which recalls the words of Seneca: “Study death always.” Yet upon entering the world of Ars Poetica, listeners may find themselves disarmed by the austere gracefulness with which these matters are addressed.

Perhaps it is here where the divide between Shostakovich and Mansurian most explicitly manifests itself. In the elder composer, death arrives as an interloper, the most despised of enemies. While no friend, Mansurian understands that death is but another character on the stage of life, a natural entity which one must accept.

Yet there remain things which even death cannot touch. These scores, simultaneously ancient and contemporary, will have earned themselves and their creator a well-deserved immortality.