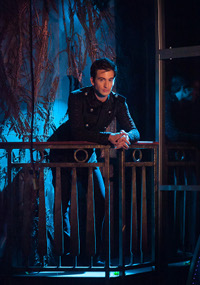 DOMA Theatre Company has an impressive resume of producing fine and entertaining musicals (“Avenue Q,” “Xanadu,” “Nine”). With some judicious editing and re-writing from an impartial third eye, their current show at the MET Theatre, the world premiere “Dorian’s Descent,” could join those esteemed accomplishments.

The talented cast has obviously been chosen for their almost-uniformly strong vocal chops, which becomes quite pleasantly evident as every (almost every) performer gets the individual spotlight to shine.

Loosely based on Oscar Wilde’s classic “The Picture of Dorian Gray,” “Dorian’s Descent” revolves around spoiled rich kid Dorian (the vocally adroit Michael D’Elia) who sells his soul to the Demon (Toni Smith, gifted with a stunning voice and magnetic stage presence) so that his physical youthfulness remains while his portrait ages and displays his real inner ugliness.

The vocally exceptional performers really can sell their numbers — Jeremy Saje as Dorian’s portrait artist Basil, Cassandra Nuss as Dorian’s fiancée Sibyl, Lauren Hill as Dorian’s potential girlfriend Madeleine, Tony Graham as Sibyl’s brother and Michelle Holmes as Sibyl’s mom Margaret. Unfortunately, their numbers go on and on, driving, drilling home their respective messages. Even the always-dependable Smith’s wonderful talents cannot hold the audience’s attention throughout her very long solo, “Dorian’s Descent,” which inexplicably morphs into a dance coda. The best number is short and very sweet, and the only time Dorian is allowed to be a sympathetic character: D’Elia’s soaring rendition of “Open Up Your Heart.” The able 13-member chorus sang and danced quite nimbly, keeping the show’s pacing from sagging between the long vocal sets.

A major flaw of this show is that there are no sympathetic characters to root for and/or no delicious villains to root against (the closest would be Kelly Brighton’s unlikable agent Henry).

Quadruple-tasker Marco Gomez co-wrote the book (with Chris Raymond and Michael Gray), co-wrote the lyrics (with Raymond), staged most of the numbers (with assist from choreographer Tania Possick) and directed this almost-three-hour hodgepodge of not-always-compatible slapstick, overacting, straight dramatics and incredible singing.

I could not determine the year “Descent” was set in as the glittery, over-the-top costuming by Michael Mullen seemed pulled from different eras, with some of the performers appearing to wear outfits taken from their own closets. For the only indication of characters aging in the second act, 20 years later, makeup designer Karen Sanchez had dark circles applied under Graham’s eyes. And I’m not sure who should take the credit for the very fake, very distracting handlebar moustache on one of the chorus guys in the first act.