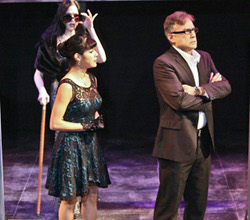 “Nine” revolves around the renowned Italian film director Guido Contini, who is suffering from writer’s block while being aided (or hindered) by the women — many women — in his life. Broadway musical aficionados will know the talented and suave triple-threat David Michael Treviño follows in the lofty footsteps of Raul Julia and Antonio Banderas (and Daniel Day-Lewis in the film version). Treviño handles his octaves-ranged vocals with charming and seductive aplomb. He really shines in all his solos, but especially in “Guido’s Song” and “The Bells of St. Sebastian.”

The women! Where do we start with the talent in this show! Melissa Anjose plays Guido’s long-suffering wife Luisa, with the voice of a resilient angel, the backbone of a quarterback and the patience of a saint in dealing with Guido’s infidelities and insecurities. Anjose simply stuns in her two solos: “My Husband Makes Movies” and “Be on Your Own.”

As Carla, the mistress who’s so in love with Guido, Lovlee Carroll gets to fully utilize her yummy vamping, her scrumptious flirtation and her fancy footwork in “A Call From the Vatican” and her amazing vocals in “Simple.”

Toni Smith, as Guido’s frequent leading lady Claudia, deserves all the kudos that come her way.  Not only does she sing her socks off in “A Man Like You/Unusual Way” and “Cinema Italiano,” Smith performs the entire show wearing a medical boot and sporting a cane, albeit a beautiful rhinestone cane! Hats off to all involved, onstage and off, who re-worked the high-energy choreography of “Cinema Italiano” to make the injured Smith fit in so naturally and perfectly. I didn’t realize for most of the first act that the cane was for the actress as opposed to the character. Bravo, Toni Smith!

As Saraghina, the whore with a heart of gold who introduced the young Guido to his sexual awakening, Liza Baron uses her vocals and buxom moves to dominate in a wonderful “Cabaret”-like burlesque, “Ti Voglio Bene/Be Italian,” involving fans, chairs and lots of bumps and grinds.

Andrea Arvanigian gets her moment to shine in the fully staged “Folies Bergeres” (complete with costumed showgirls) as the 100-words-a-minute singing assistant Stephanie. (I only wish her delicious machine gun delivery wasn’t overwhelmed by the rest of the cast’s vocals.)

Other women in this extremely vocally endowed cast include Michelle Holmes, Emilia Sotelo, Brittany Rodin, Amy Garbett, Tania Possick and Devin Holliman. Donovan Baise is ideally cute as the 9-year-old Guido. The chorus guys (Ra’Shawn Durell, Victor Mercado and Alex Favela) don’t have the vocal demands of the others but take full opportunities to impress with dazzling dancing expertise.

If you close your eyes, the harmonies in group numbers (especially the closer, “Long Ago”) make you think you’re hearing an angelic church choir. The seven-piece Band, dexterously conducted by Chris Raymond, sounds like a full symphonic orchestra while never overpowering the heavenly voices.

Amanda Lawson’s clean two-story set design flawlessly serves alternately as a blank palette and as a Venetian spa for the players to shine. Irvin Jimenez’s costume design evokes the right oomph for the passionate women that populate Guido’s life.

Once you get past the opening, the overly long “Overture Delle Donne,” settle in to be entertained for the rest of the two-hour-and-10-minute performance.