On Oct. 5, Gustavo Dudamel led the LA Phil in a performance of three works: “Shing Kham” by Peter Lieberson with percussion soloist Pedro Carneiro, the Symphony No. 4 in C minor, D 417 (“Tragic”) by Franz Schubert, and the Piano Concerto No. 1 in B-flat minor by Tchaikovsky with Yefim Bronfman as soloist.

The concert opened with the Lieberson, a work for solo percussionist and orchestra composed in 2010-2011 and realized by Leiberson’s peer, Oliver Knussen, because of the composer’s untimely death from cancer. The piece itself was very accessible; the music was compelling, and the orchestral writing was crisp. Carneiro played brilliantly, constantly picking up and putting down all sorts of mallets and often playing with four at a time, two in each hand. However, and I know this borders on sacrilege to say, the solo percussion did not add much. I thought the piece could have stood on its own with perhaps some of the solo percussion (most notably, the marimbas) incorporated with the standard percussion instruments. This assessment is not completely fair to Carneiro, however, because it was his relationship with Lieberson that led to the composition of the piece in the first place. 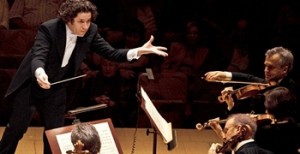 The first half concluded with a performance of the Schubert symphony. Conductors take a lot of liberties with tempo markings, and the Schubert Fourth Symphony is no exception. The first movement opens with adagio molto and then changes to allegro vivace. Dudamel’s adagio molto was to the letter, but his allegro was on the slower side which, consciously or not on his part, had the effect of better reflecting the “Tragic” title given to the symphony by Schubert. The slightly slower tempo in the allegro may have provided more urgency to the coda.  The internal movements were played by the book, while the finale (allegro) was quickly paced. All in all it was a satisfying performance.

Of course, Tchaikovsky’s Piano Concerto No. 1 is a demanding work for the pianist, and, as such, every young piano virtuoso wants to tackle it. But the piece is played so often that before the concert I was wishing Dudamel and Bronfman had chosen a different concerto. However, once Dudamel signaled the four-note sequence that begins the concerto, it was clear that this performance would be special, and it only became more apparent as Dudamel and Bronfman and the entire orchestra delivered one of the most inspired and inspiring performances of this concerto that I have ever heard.

Dudamel always provides especially sensitive orchestral accompaniment to soloists. In the present case, this allowed Bronfman to show why he is one of the world’s great pianists, technically and artistically. And, at the ripe old age of 55, he is to this generation what pianists like Richter, Arrau and Brendel were to their generation. In this day and age when many of the young soloists seem as preoccupied with fashion as performance, Bronfman, looking a little like Brahms in his later years sans beard, walked out and simply displayed a commanding presence on the keyboard. Also, the orchestra was in top form with the strings playing with a lusciousness that Tchaikovsky himself would have appreciated. The second movement, andantino semplice, was rendered slowly and simply with a wisp of a flute solo by Principal Flutist Julien Beaudiment. The third movement was every bit as fiery as Tchaikovsky could have dreamed, and the concluding notes brought the audience to their feet cheering.

The audience wouldn’t let Bronfman leave without an encore, which he obliged by launching into an explosive performance of the third movement (precipitato) of the Piano Sonata No. 7 in B-flat major by Prokofiev.

This concert was a fitting start to the 10th-anniversary celebration of the now-iconic Disney Hall. Deborah Borda must feel very proud to watch her find of the century, Gustavo Dudamel, leading the LA Phil in what is now considered one of the great concert halls.

For a calendar of upcoming concerts, visit www.laphil.com.