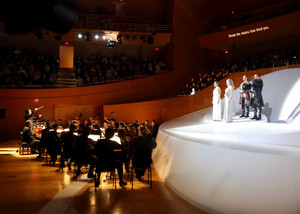 Gustavo Dudamel and the LA Phil share the stage with the opera stars in “Così fan tutte.” / Photo by Craig T. Mathew and Greg Grudt/Mathew Imaging

Gustavo Dudamel and the LA Philharmonic wrapped up the Mozart/Da Ponte Trilogy this weekend with “Così fan tutte.” Once a year for the past three years, Angelenos have had the chance to experience a staged opera at Walt Disney Concert Hall. The LA Phil productions are not on the scale of LA Opera’s; but their intimacy is part of their magic. Yes, they showcase the ingenuity of contemporary architects and fashion designers, but the main reason they have been a highlight of the cultural scene is that the world-class orchestra shares the stage with the opera stars — turning the spotlight more brilliantly on all of the people that bring the musical genius of Mozart and librettist Lorenzo Da Ponte to life.

Christopher Alden brought a sense of continuity as director of the Trilogy. Yet this “Così fan tutte” felt like a different entertainment than 2012’s “Don Giovanni” and 2013’s “The Marriage of Figaro.” That is most likely the result of the opera itself, which seems to showcase individual voices more than extensive dialogue and a complicated plot. Indeed, Ferrando and Guglielmo’s test of the faithfulness of their fiancées Fiordiligi and Dorabella through disguises, a deception aided by the troublemaking Don Alfonso and Despina, is fairly straightforward.

But more than that, there didn’t seem to be as much playfulness in this opera buffa — though Dudamel’s contribution of a line received much applause from a delightfully surprised audience. And it got old to see the characters overplaying the sensuality of the opera. To quibble with another detail, it was disappointing to see Don Alfonso and Despina smoking — haven’t we moved past using cigarettes to emphasize cool indifference?

Where the production excelled, as always, was in the music, singing and acting. And the acoustics of Disney Hall are perfect for appreciating every note. Dudamel eased a passionate performance from a small orchestra of LA Phil principals at the front of the stage where the audience could appreciate their virtuosity and expression. The entire cast was strong. Miah Persson particularly showed off the range of her ethereal voice as Fiordiligi. And it was hard not to love the acting and singing of Rod Gilfry as Don Alfonso and Rosemary Joshua as Despina. The role of Don Alfonso is juicy, and Gilfry squeezed out every drop of devilish humor. 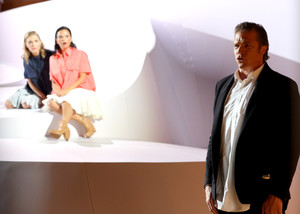 Pritzker Prize-winning architect Zaha Hadid and Dudamel are credited for set design. The white spiraling set seemed to be inspired by Frank Gehry’s curving stainless steel facade. It was minimalist and utilitarian, though its sudden undulations later in the opera didn’t have a clear purpose.

The costumes designed by Hussein Chalayan, named one of 100 all-time fashion icons by Time magazine, were just too casual. Ferrando and Guglielmo first appear in wide, white knee-length shorts and white sneakers. Both men and women sported oversized, boxy shirts or jackets (with holes in the armpits), which looked slightly bizarre because they converted to different outfits when the singers took their arms out and let the shirts drape down behind them. A neat trick, but it mostly fell flat because it wasn’t too exciting to see one everyday outfit turn into another almost equally casual one. However, this novelty did get a reaction near the end, intended or not. There was uncomfortable laughter when Ferrando and Guglielmo removed their jackets to reveal tunics matching a little too closely the women’s dresses.

The Mozart/Da Ponte Trilogy was a fresh and inventive excursion into opera and a great complement to LA Opera’s programming next door, and “Così fan tutte” provided a fabulous close to the LA Phil’s 10th anniversary season at Disney Hall.

For a schedule of concerts at Disney Hall, visit www.laphil.com.