Gustavo Dudamel and the Los Angeles Philharmonic heralded the arrival of spring with a series of concerts in May exploring all nine symphonies of Franz Schubert, paired with the song cycles of Gustav Mahler — Songs of a Wayfarer, Kindertotenlieder, Rückert Lieder and Des Knaben Wunderhorn. This reviewer attended the May 18 concert that featured Schubert Symphonies 5 and 6 and Mahler’s Rückert Lieder.

In many ways, Schubert and Mahler could not have been any more different in their life trajectories; the two composers lived roughly 100 years apart, the former at the cusp of the rise of the Romantic movement and the latter at its climactic conclusion. Schubert wandered from one job to another and one housing roommate to another, and struggled to gain recognition as a composer, beyond the close circle of friends and acquaintances that recognized his vast talents. Mahler on the other hand found recognition for his compositions and more so as conductor of the Vienna Court Opera, Vienna Philharmonic and later the Metropolitan Opera and the New York Philharmonic. Many of Schubert’s works were chamber music for smaller and intimate settings, while Mahler’s music required large orchestras that often filled the extremities of many concert hall stages.

But the disappointments and tragedy that befell these composers in their short lives emotionally link these two towering giants of German Romanticism. Schubert lived in poverty for much of his life, unable to earn much success with his compositions, and his condition was only alleviated by his close circle of friends. His love for a young soprano, Therese Grob, could not be fully realized due to strict marriage consent laws that required Schubert to provide proof that he could financially support a family.

Mahler for all his successes and recognition during his lifetime was not without disappointments, which came in the form of “three hammers”: first, when he learned of his wife’s affair with the architect Walter Gropius; second, when Mahler’s 5-year-old daughter, Maria, died from scarlet fever and diphtheria; and third, when he learned of his eventual fatal heart condition.

Perhaps the two composers, as distant as they were across the spectrum of time, found commonality in the human voice as the most effective vehicle with which to artistically express their most intimate and personal thoughts and emotions, borne out of their shared life experiences in rejection, loss, grief and heartbreak. Schubert wrote over 600 lieder for voice and piano. Mahler, in addition to the lieder mentioned above, incorporated roles for voices in several of his symphonies, often quoting the themes from his lieder even in his symphonies with no roles for voice.

As tragic as Schubert’s short life was, the presence of death played a role much more prominently in his later works. The early Schubert Symphony No. 5 that opened the concert was sunny in disposition. Written when he was only 19 years old, the Fifth Symphony displays little of the pressure present in his prior symphonies to follow in the steps of Beethoven, the man whom Schubert greatly admired and who cast a towering shadow over all composers of the 19th-century Romantic era.

Rather, Schubert looked back to the masters of the classical era, Haydn and Mozart. The opening Allegro movement starts with a delicate and lighthearted theme by the upper strings that demonstrates Schubert’s gift for creating delightful melodies. If the Fourth Symphony alluded to Beethoven, then the Fifth paid homage to Mozart, particularly in the Menuetto that recalled Mozart’s Menuetto from his famous G-minor Symphony. Throughout all the movements, the upper strings of the LA Phil displayed a continuous momentum of energy that kept the pace of the music moving forward, even between rests in bars. Never mind the gray hair among the musicians and even the young Dudamel; they all performed as if they were fresh out of USC. 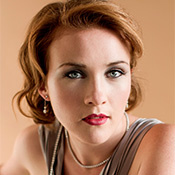 Transitioning from Schubert’s Fifth Symphony that released a bountiful spring dust of pollen into the concert hall to Mahler, in whose music death is often a constant lurking presence, could have been problematic. But the first selection in the Rückert-Lieder, “Liebst du um Schönheit” (“If you love for beauty’s sake”) sung by the mezzo-soprano Sasha Cooke, maintains the flirtatious energy of spring set by Schubert. In “Blicke mir nicht in die Lieder!” (“Don’t try to find me through my songs”), the violins buzz like mating bees, as Cooke sings, “when they’ve revealed bountiful honeycombs, You’ll be first to feast on them!” The youthful and lust-filled energy continues in “In Ich atmet’ einen linden Duft,” when Cooke sings, “How lovely linden fragrance is! You plucked the linden shoot so gently, Softly, I breath.”

It is not until the fourth song in the cycle, “Um mitternacht” (“In midnight”), that a sense of despair overwhelms the mind in the fourth verse, “At midnight, I fought the battle, O humanity, your suffering, I couldn’t resolve it.”

Perhaps the most exquisitely beautiful of the song cycle (or any song by any composer for that matter) is “Ich bin der Welt abhanden gekommen” (“I am lost to the world”). The heart-aching beauty of this song lies in not how the music and poetry expresses the depth of pain and suffering in a melodramatic manner, but rather in a serene and controlled way that further heightens the sense of melancholy. The English horn introduces the somber theme that is taken over by the mezzo-soprano with the stark, lonely bassoon echoing in the background.

In the second verse, the poem goes into further despair, “it didn’t matter to me a bit, if [the world] took me for dead.” Here, the poem concludes with the realization that in breaking away from the world, it has shackled itself away from despair and thus found heaven. At this moment in the music, Mahler brings in the well-known theme from Adagietto from his Fifth Symphony, used in that symphony as a declaration of love for his wife Alma. Here, the poem instead declares love for music. If the signature Mahler climax is typically achieved with a full-size 100-plus orchestra searing in triple fortissimo, here climax is miraculously achieved in near silence with only a thin veil of instruments in the orchestration. As the mezzo-soprano slows the tempo to sing, “I live in my own Heaven, In my song, In my music,” there is only the sound of hushed strings nodding along in agreement and the resonating pluck of arpeggios from the harp. It is at this intimate and quiet moment that height of ecstasy is achieved. The Disney Hall audience certainly felt this, remaining in utter dazed silence as the sound of the English horn, strings and harp ghostly evaporated to the upper chambers of the hall like a morning dew.

The concert concluded with another early Schubert Symphony — the Sixth. Much like his Fifth, the symphony is lighthearted and jubilant. The Sixth again pays homage to Mozart, with an introduction consisting of grand chords followed by rising scale, much like Mozart’s Symphony No. 39. In the Scherzo, the elegant buoyancy and Mendelssohn-like virtuosity with which the strings and woodwinds tossed the theme back and forth like a volleyball demonstrated the world class standard of our hometown band.

It would have been perhaps more fitting to end the program with Mahler to echo Mahler’s conviction of, as Mahler commentator Andreas Kluge wrote, “death and life as the basic elements of normal existence,” a theme also present particularly in the later works of Schubert. The pairing of Schubert and Mahler seemed to be a message from fellow mortals from distant pasts, that even as we live the good and bad moments in our daily lives, they all occur on the soil which will consume us all. The beauty these two composers captured for us in the form of music serves as a reminder for us all to savor, as Aaron Copland remarked in a televised interview, “the thrill of being alive.”