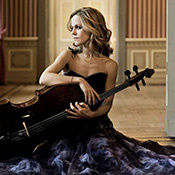 On Thursday night, Gustavo Dudamel and the LA Phil began their concluding weekend of the Schumann Focus series with a performance of the Symphony No. 3 in E-flat major Op. 97, “Rhenish.” Also on the program was the Overture to Genoveva, Op. 81, and the Cello Concerto in A minor, Op. 129 with soloist Sol Gabetta.

The program began with Schumann’s Overture to Genoveva, Schumann’s only opera that received only a handful of performances. The overture, however, not only survived, but remains a part of the repertoire. Schumann composed the overture after a long bout of severe depression, and its opening in C minor conveys the dark mood. Fortunately, it concludes in a more glorious C major. Dudamel and the Phil performed it admirably with some stand-out playing by the four horns.

The first half concluded with the Schumann Cello Concerto featuring the Argentine cellist Sol Gabetta. The concerto — unlike those by Saint-Saëns and later by Dvořák, which are more masculine — is an understated piece in essentially one long movement (or three movements played without pause). Gabetta played it beautifully, swaying with the music. Her fingers moved with a lightness and speed that show why she is in much demand these days. Dudamel, as always, provided a sensitive accompaniment and, as with Mitsuko Uchida last Saturday night with the Schumann piano concerto (see our review), and with every soloist, Dudamel is content to let the soloist receive all the accolades from the audience, even when Gabetta (as Uchida did on Saturday night) made futile attempts to bring Dudamel into the spotlight.

The concert concluded with the Symphony No. 3. This symphony was written when Schumann and his family moved to Düsseldorf, which is situated on the Rhine river in far western Germany. The symphony reflects Schumann’s joy — which was always short-lived — in his new environs. The symphony is composed of five movements — two joyful and exuberant outer movements and three shorter inner movements, including a solemn fourth movement to commemorate the recently completed Cathedral in Cologne (begun in 1248). That movement is one of the most extraordinary in the symphonic literature with its mood, coloration and use of a trombone choir.

This series of concerts is being recorded, and it’s difficult to say, but it seemed as if Dudamel were performing for the posterity of the recording. He was as animated as I’ve seen him, and, as he did with the second symphony (see our review), he and the Phil brought out all the exuberance in the third symphony, rushing in the fourth movement to the triumphant brass-infused conclusion, and bringing the thrilled audience to their feet.