On Feb. 24, Gustavo Dudamel returned to Walt Disney Concert Hall after an almost four-month absence to conduct an unusual concert for him — one with no contemporary works. Instead, he led the LA Phil in a program of all Romantic works featuring Wagner’s Siegfried’s Death and Funeral Music from Götterdämmerung, Brahm’s Violin Concerto in D major, Op. 77, with Gil Shaham as soloist, and Schumann’s Symphony No. 3 in E-flat major, Op. 97, Rhenish.

During the time that both Wagner and Brahms were alive, it is doubtful that any concert would have featured works by both composers who were already giants in their own right, though Wagner was 20 years Brahms’ senior. At the time, each composer had separate followings proclaiming their composer’s music the best and deriding the other’s. Even the composers themselves got into the action. Wagner was particularly harsh when it came to Brahms, criticizing him for being an anachronism, whereas Brahms was more respectful of Wagner’s music than of the man himself, especially his anti-Semitism. Who won? We did, of course, as was evident at Sunday’s concert. It is true that Wagner was ahead of his time musically (he was actually a contemporary of Robert Schumann although he outlived him by 25 years) and Brahms was behind his time musically. One thing is clear, however. They were both masters of their particular forms: Wagner with operas and orchestration and Brahms with the classical forms (symphonies, concertos, chamber music and solo piano music).

So, on Sunday, the audience got to revel in works by both composers at the height of their art. The concert opened with Wagner’s Siegfried’s Death and Funeral Music, which Dudamel began with the two-note motif played barely audibly by the timpani. Much of the orchestral music of Wagner’s operas can stand on its own as a showpiece, and Siegfried’s Death and Funeral Music is no exception, with its array of brass instruments, including Wagner’s own invention, the Wagner tuba, and four harps! And, frankly, Disney Hall is the place to hear a Wagnerian orchestra, and Dudamel took full advantage of that in a lush and appropriately moody performance that belied the beautiful sunny day outside. 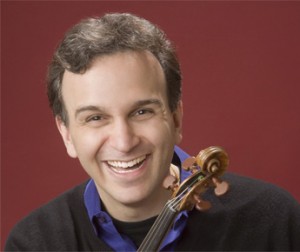 At times, especially in the quieter moments, which Shaham forced to be even quieter, he moved close to and faced Dudamel as if he were playing only for him. Throughout the performance, and even in its aftermath when the audience was standing and cheering, it was clear that Shaham and Dudamel have a special relationship and profound respect for each other’s musicianship. In fact, at one point during the cheers and applause, Shaham bowed to Dudamel, which Dudamel tried to resist. Then Dudamel got down on one knee to bow to Shaham, which evoked laughter in the audience.

Dudamel and Shaham were clearly having fun, and because they both knew the piece so well, Dudamel took some liberties with the dynamics and, in the last movement, inserted a few significant ritardandos. The result was a joyous performance of this great concerto.

As for the orchestra, Principal Oboist Arianna Ghez beautifully played the solo to begin the second movement. There were, however, problems with the horns. After a couple of flubs, one in the Wagner and one particularly noticeable one in the slow movement of the Brahms, the horns played with a timidity that showed in some of their entrances, which did not come in perfectly on the notes. The problems with the horns continued in the Schumann, even though they did play better. If the playing on Sunday was indicative of any other performances, then perhaps Dudamel should work with the horn section because while an occasional flub is understandable, to hear so many in one performance is simply unacceptable.

The concert concluded with a rousing performance of Schumann’s Third Symphony, which Dudamel and the orchestra plumbed for all its exuberance. Particular standouts were bass trombonist James Lofton, who got the rare chance to play without the other trombonists in the fourth movement, and Principal Timpanist Joseph Pereira, whom Schumann kept especially busy in the first and fourth movements.

Consistent with his modus operandi, Dudamel conducted the entire concert without scores, and it is clear that the LA Phil is now his orchestra. They simply play differently for him than for anyone else, and the mutual admiration between conductor and orchestra is palpable.