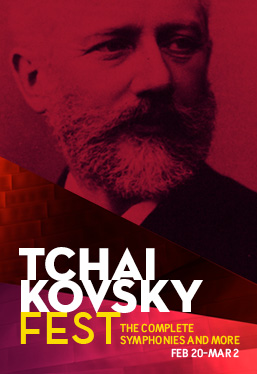 This was the second concert of the LA Phil’s Tchaikovsky Festival, which began on Feb. 20 and will run through March 2. Over the course of the week, Dudamel will lead the LA Phil and the Simón Bolívar Symphony Orchestra in the composer’s six symphonies, symphonic poems and fantasy overtures, and waltzes from his three great ballets and from his opera Eugene Onegin.

Juxtaposing Tchaikovsky’s first and last symphonies on the same program allowed the listener to see the development of his symphonic writing over a period of about 30 years. The Symphony No. 1 in G minor, Op. 13, “Winter Daydreams,” is a youthful symphony from the pen of a composer who, although he was finding his way with symphonic composing, was still able to produce a significant work. It has the unmistakable stamp of Tchaikovsky with sections, including a choir of woodwinds and horns in the first movement and the horn solo in the second movement, that anticipate his later ballet scores, The Nutcracker and Swan Lake. Despite its relative immaturity, the Symphony No. 1 is full of Tchaikovsky’s trademark melodies and exuberance, and it ends in a rousing conclusion with the orchestra joined by the trombones, tuba, bass drum and cymbals who waited patiently through the first three movements for their turn.

Dudamel has conducted most of Tchaikovsky’s works, but until this week had not conducted the first symphony. He and the orchestra gave the audience a fresh, unadulterated performance. Dudamel’s instrument is the orchestra, and he conducts every nuance in a score. His Tchaikovsky First was no exception. He was aided by the fact that many in the crowd may not have been as familiar with this symphony as with Tchaikovsky’s more famous last three symphonies. And the orchestra was in top form. In particular, Arianna Ghez’s oboe solo in the second movement was hauntingly beautiful, and Principal Horn Andrew Bain nailed a warm, yet strong solo.

The Symphony No. 6 in B minor, Op. 74, “Pathétique,” was Tchaikovsky’s last symphony and is worlds apart from his first, not just in time, but in structure and mood. Even though they are both in minor keys, the first symphony doesn’t convey a mood of pity, grief or sorrow, as does the sixth; hence, the subtitle “Pathétique.” By the time he wrote the sixth, though, Tchaikovsky had mastered the orchestral form.

The symphony begins and ends somberly with the low strings and bassoon. The orchestra played with the emotionality demanded of the piece, and each of the sections performed at the highest level. The many transitions between the sections were handled perfectly. For example, toward the end of the first movement, there was such a seamless transition from the horns to the trombones that if one’s eyes were closed it would have been difficult to tell when one left off and the other began. Principal Bassoon Whitney Crocket and Principal Clarinet Michelle Zukovsky played wistfully, conveying the essence of the subtitle.

These praises aside, Dudamel’s interpretation didn’t reach out and grab me the way his 2010 one did (see http://culturespotla.com/2010/05/la-phil-finale/). It was a powerful performance, but one that wasn’t wrenching. Perhaps he fell victim to his own fear that he wouldn’t be able to offer up a fresh approach to a work he has conducted many times. Another problem was that the brass section, although a wonder in its own right, overshadowed the strings during the fortissimo bars.

Of course, it is also possible that I was distracted by the audience who used the breaks between movements to offer up its own cough fest. Also, in the 2010 performance, Dudamel waited for the audience to quiet down before beginning the first and fourth movements, but this time he did not, even though the audience applauded at the rousing conclusion of the third movement. After the last, barely audible notes of the final movement, a few members of the audience began clapping before Dudamel had lowered his hands, breaking the spell of that dying moment.

Nevertheless, as always, Dudamel had the orchestra playing at the top of their game, and, if this concert was any indication, the TchaikovskyFest is an event not to be missed.