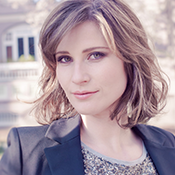 On Saturday night, Gustavo Dudamel conducted the LA Phil in works by three Russian-born composers, (K)ein Sommernachtstraum by Alfred Schnittke; the Violin Concerto in D major, Op. 35 by Tchaikovsky, with Lisa Batiashvili as soloist; and Selections from Romeo and Juliet by Prokofiev. Not only were all three composers Russian, but they all wrote music for Shakespeare’s Romeo and Juliet.

The concert opened with (K)ein Sommernachtstraum by Schnittke. The title suggests the humor and contrasting lyrical and dissonant characteristics of the piece. In German, Ein means “A,” as in “A Midsummer Night’s Dream.” Adding a K before the “ein” changes the meaning to “Not,” as in “Not a Midsummer Night’s Dream.” The music began lyrically enough with alternating solos by a second violinist sitting in the back row, Yun Tang, and Principal Flutist Denis Bouriakov, accompanied by harp and harpsichord, respectively. The music quickly (d)evolves into waves of orchestral dissonance, punctuated by returns to the initial melody, all contained in a waltz structure. The whole piece is a kind of musical joke, but one that is very pleasing to hear.

The first half concluded with the Tchaikovsky Violin Concerto. From the first notes, Batiashvili gave the piece a distinctively feminine sound. That’s not to say that she didn’t tear up the fretboard with her lightning-fast playing. But the sound she got from her 1739 Guarneri was rich and mellow. She blew the crowd away so much after the first movement that they applauded at its conclusion like it was the end of the piece. Her sound in the second movement, Canzonetta, was muted and her playing even more melancholy than the way Tchaikovsky wrote it. For the finale, marked allegro vivacissimo, Dudamel followed Batiashvili’s pace, which wasn’t easy to do.

After cheers and a standing ovation from the audience, Batiashvili and Dudamel returned to the stage and performed an odd encore: the march from “The Love for Three Oranges” by Prokofiev. It was a letdown after the fireworks for violin in the Tchaikovsky and, unlike any one of the solo violin showcase pieces she could have chosen, did not rekindle the audience’s enthusiasm.

Dudamel concluded the concert with Selections from Romeo and Juliet. Prokofiev pulled out all the stops with the score to Romeo and Juliet. He employs a large orchestra to tell the story with melodies that have become ingrained in our collective psyches. Dudamel treated the score with reverence and respect as he deftly navigated the complex musical terrain. The orchestra responded to his every nuance, from the quietest moments to the loudest, which almost shook the walls at Disney Hall. At the end, with the Death of Juliet, Dudamel held the quiet for what seemed like minutes, as if in mourning for Juliet. Never one to take the spotlight, when he finally dropped his hands and the audience began applauding, he walked off stage, leaving his orchestra to bask in the glow of the audience appreciation.