On Saturday night, Gustavo Dudamel continued his exploration of the Schubert Symphonies and Mahler song cycles with the Symphonies No. 3 and 4 by Schubert and Kindertotenlieder by Mahler.

Dudamel’s pairing of the Schubert symphonies and Mahler song cycles is one of those programming ideas that one must hear before passing judgment. But if the first two concerts are any indication, it was a brilliant stroke on the part of Dudamel.

In the first two concerts of the series, the two Mahler song cycles — Songs of a Wayfarer and Kindertotenlieder — have been about loss, in the Wayfarer the loss of love and in Kindertotenlieder the death of children. These are both serious and sad. The Schubert symphonies, on the other hand, with the improbable exception of the Symphony No. 4, subtitled the “Tragic,” are upbeat and exuberant.

Once Schubert began writing symphonies at the age of 16 — halfway through his short life and while he was working as a teacher and not as a musician — the speed at which he pumped them out, especially considering the amount of other music he produced, was nothing less than astounding. Consider that he composed the first six symphonies in a five-year period between 1813 and 1818. Even though these symphonies all owe their basic structure and length to the influence of Haydn and Mozart, each is distinctly Schubertian and signals, along with the symphonies of Beethoven, ideas that would move the symphony from the classicism of Mozart and Haydn to the romanticism of Brahms and Bruckner.

On Saturday night, Dudamel began with a brisk and lively performance of Schubert’s Symphony No. 3 in D major, D. 200. As with Schubert’s first two symphonies, the third is in a major key and exudes energy and youthfulness. The symphony begins with a D major bang and, except for the beginning Adagio of the first movement, never really slows down. Even in the Allegretto (second movement), Dudamel picked up the tempo faster than many other conductors. At the conclusion, Dudamel barely bowed, and after the second curtain call he simply walked off stage leaving the orchestra standing, as if to say, “They could have played it this well by themselves.” 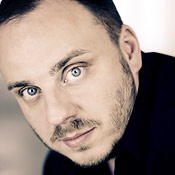 German baritone Matthias Goerne joined Dudamel and the Phil in an amazingly heartfelt performance of Mahler’s Kindertotenlieder based on poems by Friedrich Rückert. Rückert wrote the poems after the deaths of two of his children from scarlet fever, which nowadays can be treated with antibiotics. Mahler had his own brush with death a few months before he began working on the songs. Ironically, and sadly, his own daughter, Maria, died a few years later from scarlet fever and diphtheria, the latter of which we now have vaccines to prevent. The songs are not only about sadness and loss, but about the overall natural context of death and the possibility of an afterlife as symbolized by the frequent allusions to light.

Goerne put his whole body into his singing and seemed to be physically grieving along with Rückert and Mahler. There was a somber air that fell over the entire hall that even affected the musicians who wore solemn looks on their faces. Such as it is when speaking — or singing — about the deaths of children. Mahler’s orchestration was sparse and unusually light, which along with the sparseness of the words, gave the songs an overall ethereal effect, which was made even more poignant with the serene D major ending of the last song, “In diesem Wetter” (“In this weather”). Goerne’s range and vocal control was impressive, and he sang as if he had lived Rückert and Mahler’s sadness. Dudamel, as always, put himself in the background, as he does when he accompanies a soloist, but he led the orchestra with his customary sensitivity.

The concert concluded with Schubert’s Symphony No. 4 in C minor, D. 417, the so-called “Tragic.” However, except for the minor key, the symphony is more dramatic than tragic. This was especially apparent following the literally tragic Kindertotenlieder. But, as Dudamel did with the first three symphonies, he simply killed with the fourth. He had the Mozartian and Haydnesque-sized orchestra sounding more like a Beethoven-sized orchestra, and, in fact, excluding the key of C minor, Dudamel’s version reminded one of Beethoven’s Fifth with an overall effect of constantly building momentum towards the conclusion.

For anyone in the audience unfamiliar with Schubert’s symphonies — if, indeed, there was any such person — Dudamel succeeded in introducing them — and reintroducing the rest of us — to the wonder of these symphonies brimming with musical invention and excitement.

So far, Dudamel’s Schubert-Mahler cycle is a triumph. We look forward with eager anticipation to the final two concerts in the series.