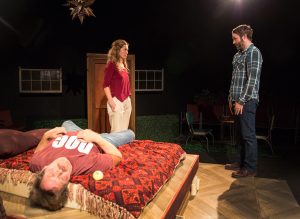 Weird title, huh? But it is certainly fitting considering the oddballs who inhabit this world-premiere play from Dominic Finocchiaro. It’s the first play of the season by the Echo Theater Company, which specializes in new plays. For 90 minutes (without intermission) we are treated to a panoply of individuals, most of whom seem somewhat lost or angry or deluded. As Finocchiaro explains, “I wanted to examine the anatomy of loneliness.” “The Found Dog Ribbon Dance,” which has been extended through March 12 at the Atwater Village Theatre, succeeds in that aim, with abundant helpings of humor to leaven the sadness underneath.

The ribbon dance of the title is first performed at the very opening of the play (with a reprise later). A shirtless man in a Mexican wrestling mask dances to Whitney Houston while twirling two sticks with long red ribbons attached to the ends — Chinese style. He seems to be filming himself for a later online upload.

Then we cut to a woman who appears to be getting ready to have paid sex with a clumsy, halting man in goofy pajamas. Only it turns out that she is not a common hooker, but a professional cuddler, paid to lie next to her clients and soothe them with kind words and non-sexual touching. I did not know this was actually a thing, but apparently there are apps/websites like Snuggle Buddies and Cuddlist that specialize in just this. For about $80 you get to lie down next to someone for a half-hour who will cuddle your cares away.

So inevitably, our lonely ribbon dancer Norm (Steven Strobel) is destined to meet our cuddle bunny Norma (Amanda Saunders) at the coffee shop where he works as a barista. They hit it off, one thing leads to another, and they become romantically involved. Inserted as segments into the arc of the couple’s relationship are several of Norma’s cuddle sessions, each of which explores a different facet of loneliness or at least disconnectedness. Of the half-dozen or so clients, Julie Dretzin as the hyper-wound-up business woman Miranda is the most fun to watch. She is so tightly strung, you could almost play her with a bow.

So what about the “found dog” in the title? It turns out Norma has taken in a wandering dog she found and is keeping it in her apartment temporarily. The dog is played by Daniel Hagen, who wears a T-shirt that says “DOG” on it. He barks, sniffs, scratches, chases and snoozes while other characters do their thing. Hagen’s hangdog expression is perfect for the role, and while he probably has an important symbolic role as an exemplar of the different ways we commit, he seems mainly there for comic relief.

If there’s a problem with the play, it’s that the characters all seem so random. Norm is a bearded hipster type, but is so awkward and unsure of himself when talking to Norma that it’s painful to watch. Norma is kind of a gentle soul hippie chick, but seems very normal, levelheaded and self assured. What she sees in Norm is a mystery. I think it’s supposed to be a cute and quirky romance, but it comes off more as a head scratcher.
As it turns out, Norma is the one who is unable to let go and commit to anything deep, even though she is the one supposedly making these psychic connections with her clients every day. Inevitably, things with Norm turn sour and they break up, with some hope of rapprochement at the final curtain.

Overall, I like the variety of different characters — mainly Norma’s clients — with their differing motivations for the cuddle therapy. The humor works as a buoy to keep the tone from sinking into a pit of despair. My vote for best character? DOG.