On Sunday night, while Hollywood celebrities were celebrating their accomplishments in film and many Angelenos were watching the Academy Awards, an almost packed house at Walt Disney Concert Hall was witnessing one of the truly great musical events of the season, if not of the decade.

A power trio of superstars — pianist Emanuel Ax, violinist Leonidas Kavakos and cellist Yo-Yo Ma — performed the three published piano trios by Johannes Brahms, the No. 1 in B major, Op. 8, the No. 2 in C major, Op. 87, and the No. 3 in C minor, Op. 101.

The setting could not have been a starker contrast from the concert the night before in which a cast of hundreds of musicians and singers performed Andrew Norman’s A Trip to the Moon accompanied by a technological extravaganza with green screens and videos that was a feast for the eyes and ears (see our review).

On Sunday evening, it was just three individuals and three instruments on stage. The result, however, was no less astounding. In fact, it was also a contrast in how the acoustics of Disney Hall on the one hand can not only accommodate but handle a large orchestra and hundreds of singers and on the other hand can project the sounds from three acoustic string instruments.

In fact, I could cut this review short and still be true to the performance we were lucky enough to have witnessed in one word: Perfection!

First, the music. Music scholars know that Brahms destroyed much of his music that he thought unworthy. The result was that of all that music he composed — and we will never know the extent of that output — his published works were the only ones he thought good enough for others to hear. Talk about perfection. It would be difficult to identify three other piano trios by any other composer that are equal individually or collectively to the Brahms trios. They are the work of a mature composer who was at the height of his compositional powers and who realized much of that in chamber music. (Even though the Op. 8 was a youthful work, first written when he was 21, he revisited and revised it 26 years later when he was 56. So, it is safe to say that all three trios were the work of a master.)

But in the hands of lesser — even very good musicians — the truly sublime music in these masterpieces may not have been completely revealed. In the hands of Ax (a noted interpreter of Brahms’ piano music) and Kavakos and Ma, the performances were revelatory. 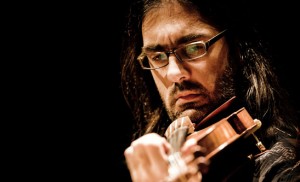 Now the musicians. These three superstars in their own right jettisoned whatever egos they may have and became one behaving organism — one unit. They have been on tour promoting their fairly recent album of the Brahms trios (on Sony), and so it is clear that this was not just a one-off performance. Admittedly, Ax and Ma have frequently performed together, so they are no strangers to each other’s playing. The result was a performance that sounded like these three amigos were a longstanding trio. Ax barely looked, at least directly, at the two string players, and Ma and Kavakos looked at and played off each other with Ma frequently smiling. Many in the audience were smiling too.

The performance was full of passion, and the long, flowing melodic lines in all three trios warmly flowed from the string players’ bows that started and stopped in unison. The chemistry between all three was evident not only in the playing, but in their smiling faces and warm embraces after each piece. This was Brahms as it should be played. As the man sitting next to me said after the first movement of the C major trio, “Wow!” Wow, indeed.

The audience stood and cheered wildly at the conclusion of the first and second halves, and after a couple of minutes of consultation between the artists, they sat back down and played “Happy Birthday” to someone named Diane and then played the second movement from the Schubert Piano Trio in B-flat major, D 898, before exiting the stage with Ma waving goodbye to the exhilarated crowd.