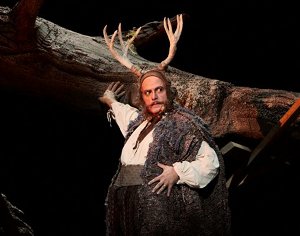 This is the bicentennial year for the birth of two of opera’s most towering figures: Richard Wagner and Giuseppe Verdi. However, Wagner had already been dead for 10 years when Verdi’s final opera Falstaff premiered in 1893. Falstaff was not some warmed over swan song from the 79-year-old composer. From all reports, the Feb. 9 performance at La Scala in Milan was an epic scene. After the final curtain, the crowd erupted in an outpouring of ecstatic exuberance; the encores and applause for Verdi and the cast lasted for more than an hour. Verdi’s apotheosis came a few weeks later at the premiere in Rome: King Umberto introduced Verdi to the crowd from his Royal Box to wild acclaim, conferring upon him the official recognition of his national cultural status.

While it is difficult to imagine such adulation today for any classic music performance, LA Opera’s production still has the ability to rouse the house. Apart from being a comedy, Falstaff offers something else different than the antecedents of Verdi operas. In the mid 19th century, opera in Italy was expected to be a certain way… formal arias, duets and set pieces sung in a series of independent, recognizable tunes often fraught with vocal gymnastics. Those who attempted to introduce Wagnerian influences to Italian audiences were rudely dismissed. With Falstaff, Verdi was introducing a new kind of musical language where the music followed the words, not vice-versa. A great diversity of musical ideas, both forward looking and backward looking, bubble forth, surging to the surface, only to submerge again in pursuit of the next idea, all with a tremendous sense of speed and propulsion. In this work, we can sense the advent of modernity in Italian opera music, a development loved perhaps more by the musicologist than the average audience keen for melody and tune.  According to LA Opera Music Director James Conlon, “Falstaff is to the conductor what Aida, Otello and Rigoletto are to those who sing their title roles.”

It seemed Verdi needed some convincing to write another comedy after his only other attempt (in 28 operas), Un Giorno del Regno, written more than 50 years earlier, turned out to be a flop. Credit must be given to Verdi’s librettist, Arrigo Boito, not only for convincing Verdi to do another comedy, but also for taking what is generally considered to be one of the sow’s ears of Shakespeare’s tales, The Merry Wives of Windsor, and making of it a silk purse. There are lots of rude and crude fat jokes, referring to Falstaff’s prodigious belly, and good use is made of the tried and true mistaken identity plot devices. All the men (save the young lover Fenton) are shown to be fools of one magnitude or another, a point driven home by relevant quotes from Shakespeare’s The Merry Wives of Windsor and Henry IV that are projected on a parchment scrim between scenes in LA Opera’s production.

In this new production, directed by Lee Blakely, Falstaff is played by Italian baritone Roberto Frontali. While only slightly stout in real life, Frontali appears after his 55 minutes of elaborate makeup prep looking like a waddling blimp. He looks even more comically grotesque when fancied up to meet his intended paramours. Frontali’s singing is strong, as is the other principal baritone, Ford, played by Marco Caria. I also thought that Alice Ford, played by Carmen Giannattasio, was impressive with her power and control. Audience reactions, however, seemed to favor young Nannetta (Ekaterina Sadovnikova) and the maid Quickly (Ronnita Nicole Miller).

The scenery and staging were mostly traditional and visually rich. The sets consisted of half-timbered houses on either side, with the space in between changing successively to an inn, a noble house and a forest. Act III was the most effective — a night scene in Windsor Forest where Falstaff is induced by his would-be inamorata to masquerade, hilariously, as the Black Huntsman. The hapless hero bumps around a grizzled, stout, old oak tree in the dark wearing a set of antlers, like the rutting stag he fancies himself to be, while children disguised as fairies and sprites torment him. It is a delicious piece of comedy, the point driven home by the ringing final words of the play: “We are all fools.”