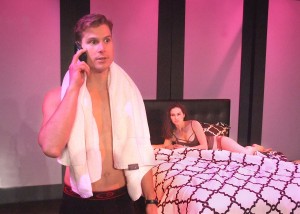 Things being what they are in Washington right now, politics has been a subject on everyone’s mind lately. While it’s still early after the seismic election results of last fall, it seems likely that playwrights will, after a certain amount of cogitation and fermentation, inevitably get around to sharpening their pencils about it. For now, we have Farragut North, a fast-paced, sharply written play that originally debuted at the dawn of the Obama era, and became a 2011 film known as The Ides of March, starring Ryan Gosling and George Clooney. It runs through May 21 at the Odyssey Theatre.

Playwright Beau Willimon was the creator and show-runner of the Netflix original series House of Cards, and it is possible to see Farragut North as a prelude to the kind of Machiavellian politics on display in that series. The play is loosely based on the 2004 presidential campaign of Howard Dean, which Willimon worked on. This invaluable first-hand experience combines with Willimon’s adeptness in TV-style pacing, for a verisimilitude of dialogue that has nary a false note. Director Cathy Linder, who previously worked as VP of Production at HBO, no doubt adds even more to the lively pace.

Currents of political and sexual intrigue swirl throughout the play, which revolves around Stephen Bellamy (Jack Tynan), an ambitious junior press secretary who makes a rash grab for a career boost, and ultimately finds his hubris rewarded in a most unwelcome way. Tynan inhabits his role convincingly, with his mobile phone glued to his ear, multitasking his way through a thousand details of a nascent presidential primary campaign. His dalliance with a pretty young campaign intern seems innocent enough at first, but his bedmate has secrets of her own, which play into his eventual downfall (or nemesis as the ancient Greeks would say). It’s all quite tragic in that way.

Ultimately, though, the play is about the limits of one’s personal moral compass when it comes to colleagues and friends. How far do you dare stray from the solid center when you know the ice is getting thinner with each step? In politics, especially, it is made clear that there is an unusually cold-blooded ruthlessness that prevails, where any small display of disloyalty is seen as betrayal and a stab in the back is a natural consequence, even by those you thought were your allies.

Each of the principal actors is well cast. Jennifer Cannon is pitch-perfect as journalist Ida Horowicz, who jokes casually like one of the boys one moment, and morphs into a blackmailing shark the next. Geoffrey Lower plays Stephen’s boss Paul, seemingly harried and distracted, but all too aware of the current tally of his political assets and liabilities. Margaret Fegan is the nubile intern Molly and surprises us with her thoroughly jaded view of romantic liaisons between co-workers.

Even though the action of the play all takes place in hotel rooms, hotel lobbies and cafes in Iowa just before the first primary caucus, the name Farragut North betrays where the heart of this drama is really set: Washington, D.C. The name refers to a subway stop in D.C. that is near where many of the lobbyists and think tanks are located. The implication is that it is within these semi-hidden loci of influence that the webs of power are actually formed and maintained. Hmmm, interesting to think how suddenly such arrangements can change.

Farragut North has been through L.A. once before (in 2009 at the Geffen Playhouse), but it seems like an excellent time for its revival. Even though campaign season is now past, a play like this reminds us that politics is blood sport and only the most cunning and strategic operators will survive. It’s a hard lesson that politicians ignore at their own peril, but it does provide a certain amount of entertainment value for those of us who prefer to remain spectators.