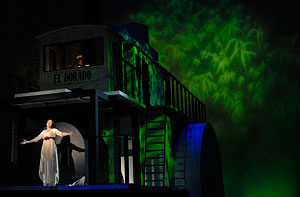 I was reminded while watching LA Opera’s latest production, Florencia en el Amazonas, of the 1982 film Fitzcarraldo, Werner Herzog’s epic tale of a dreamer who wants to build an opera house in the middle of the Amazon jungle. Referring to the film’s infamous feat of hauling a 320-ton paddle steamer over a mountain — done without special effects— Herzog called himself “Conquistador of the Useless,” a term that may have some aptness for the current production. Not to imply that this opera is without value, for there are certainly impressive aspects. But I would say that whatever destinations were on the original itinerary of this voyage up the Amazon are never quite attained, metaphorically and otherwise.

This is a modern opera, written by the late Mexican composer Daniel Catán, which premiered in 1996. The following year, it came to LA Opera under the direction of Francesca Zambello, who returns to direct this version (which reportedly has had some updating). It has become a relatively popular opera, mounted in at least a dozen American venues as well as a few internationally. Catán lived in South Pasadena and was good friends with Plácido Domingo, which may partly explain how this opera — and another of Catán’s, Il Postino (2010 season) — came to be produced locally. It also doesn’t hurt that it is a Spanish-language opera.

The story involves the passengers of a vaguely World War I-era paddleboat who are traveling up the Amazon River to Manaus to see the legendary diva Florencia perform at the opera house there. Unbeknownst to the passengers, Florencia has boarded as well, but keeps her identity a secret. Think of the setting as a downscale tropical Titanic; while the performers are sumptuously dressed to the nines, the boat itself is a rather shabby affair, all plywood, posts and ladders.

More successful is how the boat continually revolves to show different rooms where the action is taking place. Special mention is also due to the scenery designer, Robert Israel, for the remarkably coordinated backdrop of the river, a hazy painting that continuously recedes to a vanishing point when the boat is proceeding prow-to-the-front, and adjusts its movement and perspective accordingly when the boat is facing in other directions.

It’s no secret that one of Catán’s goals in writing this opera was to incorporate elements of magical realism, particularly as realized in the works of the Nobel Prize-winning Colombian novelist Gabriel García Márquez. In the opera, this mainly takes the form of dancing “river gods,” or as I prefer to call them, the pirouetting piranhas. Although also included is the impressive final scene where Florencia emerges as a butterfly. These elements of fantasy actually fit the dreamy mood of the music quite well.

One of the problems with a production like Florencia is its singularity of place. Having the action isolated on a boat means there will be no chorus coming in to liven things up, and as a result we are left scraping through shallower waters, lurching between the modest stories of each of the passenger groups. To be fair, there is an effectively dramatic storm scene at the end of Act I, but it’s not enough to immerse the viewer in what follows.

The other problem is the music. Catán’s style in Florencia is best labeled neo-romantic, and it harkens back to musical ideas popular before 1915 or so. Problem is, he doesn’t pull it off as well as the Europeans who initially developed the genre. Catán is musically literate; you can hear echoes of the tone poem masters such as Ravel, Debussy, Liszt and Richard Strauss, but excepting a few passages, Catán’s version sounded to me somewhat bland and non-descript.  This is no reflection on Musical Director Grant Gershon who effectively led the orchestra, which offered a convincingly lush, impressionistic sound.

The singers’ voices were uniformly pleasing, even if the vocal fireworks were somewhat lacking. Highlights of the mainly Hispanic cast included Arturo Chacón-Cruz as Arcadio, the young lover, and Lisette Oropesa as Rosalba, his muse. I also liked José Carbó as Riolobo, the narrator, deckhand and deus ex machina. Best of all is the eponymous Florencia, sung by Chilean soprano Verónica Villarroel. She was completely convincing playing the diva and the few times she let loose, she sounded like it too.

Ironically, the paddleboat taking this voyage is named “El Dorado” — a reference to the fabled lost city of gold that was never found. While the characters in Florencia ultimately arrive at different (yet satisfying) destinations than they first expected, the audience steams onward, ever upriver, searching the horizon for gilt and glory. At times we see glints, but it is never a city of gold — only reflections off the water.