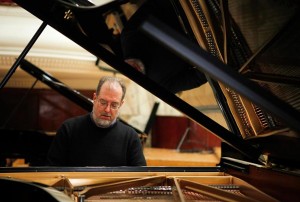 Garrick Ohlsson, the American pianist and 1970 Chopin International Piano Competition winner, returned to Los Angeles for a Feb. 23 recital at The Broad Stage. (He last performed at Disney Hall in November 2016 [see our review].)

Ohlsson chose a very demanding program, beginning with a piece he played when he last performed in LA, the Sonata No. 8 in C minor, Op. 13, “Pathetique” by Beethoven. This early sonata could be mistaken for one of Beethoven’s later ones. It is his first truly romantic sounding sonata and displays many of the features that one associates with Beethoven — pathos, dissonance, chromaticism, etc.

Ohlsson showed that he is a master of Beethoven, wringing out the sturm und drang of the first movement, making the piano sing in the second (Adagio cantabile) movement, and returning to the emotionality of the third movement.

But Ohlsson was just warming up with the Beethoven.

When he returned to the stage, Ohlsson picked up the microphone and delivered a brief lecture on Russian composer Alexander Scriabin and his eccentric genius, mysticism and megalomania before playing a selection of five pieces by Scriabin — the Etude, Op. 65, No. 1; the Etude in D-flat Major, Op. 8, No. 10; the Prelude, Op. 59, No.2; the Poém, Op.32, No. 1; and the Sonata No. 5, Op. 53. The pieces, from Scriabin’s early, middle and later periods, showed the evolution of the composer from a sort-of Russian Chopin in his earlier works to one of the originators of atonal music. But even with the dissonance in the later works, there was always a discernible melody underneath.

Ohlsson finished the program with the monumental last sonata by Schubert, the D. 960 (Op. posth). This masterpiece, composed two months before the end of his short life (he died at 31), contains many musical emotions. And then there is the enigmatic trill on G flat in the lower register of the piano that appears in the eighth measure of the opening movement, which the great pianist and Schubert interpreter András Schiff called “the most extraordinary trill in the history of music.” It is especially noteworthy because it comes amidst a beautifully serene cantabile opening theme. Although many pianists and musicologists have speculated about the meaning, if any, of the trill, given his imminent death, it’s hard not to think that the trill represents death at his door. The second movement (andante sostenuto) is almost funereal in nature with a bell-like ringing that pervades the movement. The third movement lightens up with a very brief, but very melodic and delicate — compared to the first two movements — Scherzo. The final movement (Allegro ma non troppo) brings together the disparate elements of the first three movements with “poetry and passion” (as stated by Susan Halpern in the program notes). As with most speculations about the meaning of non-programmatic Romantic music, in the end it doesn’t matter because the music is exquisite. This last sonata by Schubert is really the culmination of the great classical/romantic piano sonata.

Ohlsson’s interpretation did justice to Schubert’s masterpiece. He told a story and took the listener on a journey through the musical terrain of a brilliant composer in the throes of death, but still able to see beauty in the world.

Ohlsson rewarded the audience with an encore, the Waltz in C-sharp minor, Op. 64, No. 2 by Chopin, showing that his Chopin chops are still as good as ever.

For upcoming events at The Broad Stage, visit thebroadstage.org.