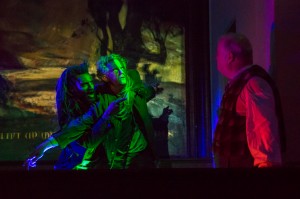 I’m not crazy about pumpkin spice anything, but one thing I definitely look forward to each fall is Wicked Lit — the Halloween-themed theater experience that haunts Mountain View Mausoleum and Cemetery in Altadena each October and November.

This is Paul Millet and Jonathan Josephson’s 10th annual fall production of Wicked Lit; and instead of going big, they have scaled way back. Gone are the plays in the cemetery and the between-show entertainment outdoors, which is too bad because the chill of the autumn evening and the dark walk through the gravestones added immensely to the spooky vibe. Everything is indoors this year, and the running time of 85 minutes includes two (instead of three) plays: Ernest Rhys’ “Tieg O’Kane and the Corpse” and Charles Dickens’ “The Chimes: A Goblin Story.” Still, quality matters more than quantity; and Wicked Lit offers an unforgettable night of smart and chilling theater.

Roaming the mazelike halls and stairs of the mausoleum at night is eerie enough, but Wicked Lit takes the creepiness up a few notches with the Hollywood-worthy makeup, costumes, set design, lighting and sound. “The Corpse” takes the audience from the halls of the mausoleum into a dark, foggy graveyard where corpses are reanimated and can’t “let go.” “The Chimes” takes place in the mausoleum sanctuary, where goblins give a poor man a “Christmas Carol”-like glimpse into the future.

Fantastic production values without great actors wouldn’t add up to much, and the Wicked Lit actors are at the top of their game. Not only can they all act, but they can do it surrounded by an audience so close at times they could reach out and touch them — unlike some movie stars who can’t focus with anyone in their eye line and require multiple takes. If I were to give a shout out, I’d have to list every single person in the cast.

The cast and crew had good material to work from; Kerry Kazmierowicztrimm’s adaptation of “The Corpse” and Josephson’s adaptation of “The Chimes” are both exceptionally well done. Although both plays will give you chills at times, you won’t leave fretting about nightmares. And despite the creepy atmosphere, Wicked Lit resists the temptation for jump scares.

For lovers of ghost stories of all kinds, Wicked Lit is one of the best treats of the Halloween season. If you don’t immediately think of Wicked Lit when everything pumpkin spice rolls out, try it this year — and start a new fall tradition. Since 2013, Wicked Lit has sold every ticket to every performance, so don’t wait! Some shows are already sold out.