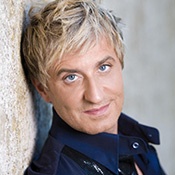 On Saturday night, Gustavo Dudamel led the LA Phil in an almost-all-Ravel program, including Le tombeau de Couperin, the Concerto for the Left Hand with Jean-Yves Thibaudet as soloist, and Boléro. Also on the program was the world premiere of a work for solo baritone and orchestra, titled True Fire, commissioned by the LA Phil from Finnish composer Kaija Saariaho.

Dudamel opened the program with Le tombeau de Couperin, which could almost be mistaken for an oboe concerto, because the oboe figures so prominently in each of the four movements. Thus, the spotlight was on LA Phil Principal Oboist Ariana Ghez, who got a chance to display the full range of talents that landed her the principal position. Dudamel and the orchestra gave a sensitive performance of Ravel’s exceptionally orchestrated tribute to 18th-century French music that not only showcased the oboe, but, indeed, all the woodwinds.

The first half concluded with True Fire featuring baritone Gerald Finley, for whom the piece was written and dedicated. For this composition, Saariaho interspersed fragments of texts from Seamus Heaney, American Indian tradition and Mahmoud Darwish between three short texts by Ralph Waldo Emerson, which Saariaho called Propositions, from the poet’s essays, “Spiritual Laws.” The piece also featured a large orchestra with a full complement of percussion, which kept the LA Phil percussionists very busy moving from instrument to instrument. With the exception of the text from the American Indian tradition, the other texts were odd choices in that they weren’t representative of what most people might know of Heaney and Emerson. However, they did fit Saariaho’s conception of the music, which is the point, right? Although Saariaho stated that her idea was “to explore the baritone voice,” and “to give Gerald Finley . . . a full range of expression,” it didn’t seem as if True Fire really did exploit the full range of the baritone in general, or of Finley’s voice in particular. That being said, the orchestral writing was superb, plumbing the depths of the color and timbre, and the LA Phil pulled it off splendidly. Compositions like True Fire have to be heard and seen in person; it is almost like performance art. But no one will walk away humming any melodies, which is a problem with some contemporary music.

The second half began with Ravel’s exciting Concerto for the Left Hand, featuring Jean-Yves Thibaudet. Ravel wrote this concerto for the Austrian concert pianist Paul Wittgenstein (and brother of famed philosopher Ludwig) who lost his right arm in WWI. If one listened with eyes closed, it would be difficult to imagine the soloist was only using one hand, and that is exactly what Ravel intended. Thibaudet showed why he was a perfect choice to play the concerto. He is tall with long arms and big hands and impeccable pianistic technique. He impressively navigated all 88 keys with his left hand.

In addition to being a consummate musician, Dudamel knows how to play an audience. Just as he did last week when he concluded the Brahms and Bach program with Leopold Stokowski’s transcription of Bach’s Toccata and Fugue in D minor, on Saturday Dudamel concluded with another showpiece, Ravel’s Boléro. And Dudamel played it as Ravel intended: slowly. Boléro offers a chance to showcase the woodwind and brass principals, all of whom made us glad they play on our team. And the audience showed their appreciation with wild screaming and applause that lasted for minutes.

This concert repeats today at 2 p.m. For information, visit www.laphil.com.