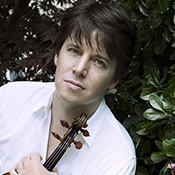 The concert began with an appetizer: a lively six-minute performance of the Mozart overture complete with bass drum, cymbals and triangle and a small set of timpani that were the norm in the early classical period. It was light and airy and a perfect first course for the heavier main course of Sibelius.

After more musicians joined the orchestra, Joshua Bell walked onstage and delivered an impassioned performance of the Sibelius violin concerto. This performance actually featured three violinists: Sibelius, who was trained on the violin and had aspirations of being a concert violinist; Dudamel whose instrument is the violin; and, of course, Joshua Bell.

As usual, Dudamel held back the orchestra during sections where the violin was prominent to allow Bell to show off his mastery of the instrument. And, unlike his accompaniment of piano concertos, Dudamel watched Bell intently to make sure that the orchestra followed his lead. Bell’s tone and technique are legendary, and both were on display on Friday’s program. With Sibelius’ and Dudamel’s help, and the extraordinary accompaniment by the orchestra, Bell captivated the audience who showered him with their appreciation.

The second half of this very short concert consisted of a delicious dessert of Mozart’s Symphony No. 34 (“Linz”), named after the city in Poland that Mozart visited on his return to Vienna from Salzburg in 1783. Mozart remarked that because he didn’t have a symphony with him to show his appreciation to his host in Linz, he wrote one “at breakneck speed.” The Linz symphony is the first of his last great five symphonies and in terms of its sound and scope certainly belongs with them.

Dudamel, however, did not perform the symphony at breakneck speed, instead giving the audience a slower version full of legato, which gave it an air of majesty, and even an almost romantic feel.

This noontime concert on Friday was a perfect start to the weekend and left the audience musically sated.