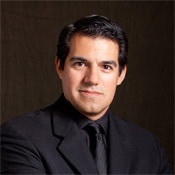 On Saturday night, Miguel Harth-Bedoya, the long-standing music director of the Ft. Worth Symphony (and previous associate conductor of the LA Phil), conducted the LA Phil in a program of music by Lizst, Chopin and Prokofiev.

After the orchestra was reduced from the large size for the Lizst to a more Beethoven-like size, Harth-Bedoya led the Phil in Chopin’s concerto for piano No.  2 in F minor, Op. 21 with Disney Hall favorite Emanuel Ax as soloist. This performance was a gem. First, although Ax is well known for his Brahms, which can be heavy-handed at times, his Chopin was light and lyrical, just as Chopin wrote it. Also, even though Chopin’s orchestral writing for his two piano concertos was minimal and obligatory (compare that to Brahms’ concertos where the orchestra is an equal partner with the piano), Harth-Bedoya’s accompaniment was so inconspicuous that at times one had to remember that it was a piano concerto and not a solo work for piano. That, of course, would not have been possible were it not for the mesmerizing playing by Ax, who made it look effortless.  And, in keeping with the Mephisto Waltz, Ax treated the audience to an encore of the Valse oubliée by Lizst.

The concert concluded with a performance of the Suite from Cinderella by Prokofiev, which Harth-Bedoya also conducted without a score, and which gave the orchestra as a whole, as well as some soloists (e.g., Principal Clarinetist Burt Hara and Principal Flutist Catherine Ransom Karoly), a chance to show off. Both sonically and musically, Cinderella is Prokofiev at his most expressive, and Harth-Bedoya and the LA Phil pulled no punches with the score: it was brash when it needed to be, for example, the Midnight section with the wood blocks loudly ticking out the time, and lyrical when it mattered, for example in the last section, Amoroso. Interestingly, Harth-Bedoya was the first conductor to perform this version of Prokofiev’s Suite from Cinderella with the LA Phil in 2001, which was approximately when he began his tenure with the Ft. Worth Symphony. So he clearly has an affinity for this piece and is the one to hear conduct it.