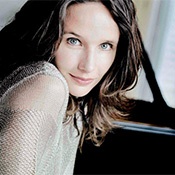 It has been quite a season for world-renowned pianists at Disney Hall, including Emanuel Ax, Richard Goode, Martha Argerich, András Schiff, Murray Perahia, Lang Lang and Yuja Wang. On Tuesday night, the French pianist Hélène Grimaud was the latest, performing a unique and personal program. It was, in fact, a tale of two halves.

Grimaud’s performance almost, but not quite, captured the effect she intended with the water-themed first half. First, she played the pieces without interruption as sort of a medley, which she had to do because stopping after each for applause would have disrupted the mood for her and the audience. And, all in all, the order worked. For example, beginning with the very soft, distant sounding and almost Brahmsian Wasserklavier by Berio allowed her to set a calm mood right from the start. Grimaud also ably handled the very technically demanding Les jeux d’eaux à la Villa d’Este by Liszt, which was a precursor to the impressionistic water pieces by Ravel and Debussy. The Takemitsu and Fauré were less impressionistic, and Grimaud’s playing on those was strong and secure. The Janáček provided a nice interlude between the Liszt and Debussy’s mysterious and sonorous La cathédrale engloutie.

Ironically, however, the French pianist could have evoked more of the impressionistic mood of the Ravel and Debussy, which in some ways were the cornerstones of the first half. They were played a bit too heavy-handed to maintain the mood and to evoke the impressions of swirling water. Her Ravel did not fully capture the glimmering water at play suggested by the title, and the Debussy could have been played more mysteriously and solemnly.

Nonetheless, the net result was a wonderful and unique experience for the audience, giving them a chance not only to hear some of these pieces for the first time, but also to hear Grimaud’s vision of how they fit together.

The second half was a different story. Contrasted with the brief evocations of water in the first half was the large scale Piano Sonata No. 2 in F-sharp minor, Op. 2 by the 19-year-old Brahms. Grimaud has been playing a lot of Brahms lately, and her affinity for the composer was certainly evident right from the explosive beginning. This sonata is very different from the introspective Brahms in his later shorter piano pieces. Brahms used the second sonata to announce his arrival on the music scene in Germany, and it worked, convincing no less than Robert Schumann to take him under his wing and promote him as the next great German composer. Similarly, with this sonata, the unassuming Grimaud showed that she can pound with the best of them. Her fiery performance was punctuated with lightning-fast octaves, and at times one might have imagined the piano crumbling under her powerful playing.

Grimaud then reverted to her French roots with two encores by Debussy, Pour les arpeges composes (composite arpeggios) from his Études and Poissons d’or (Goldfish), another water-influenced piece, from Book II of Images for piano. In both she appeared more relaxed and continued to demonstrate her command of the keyboard.

For information on upcoming concerts at Disney Hall, visit www.laphil.com.