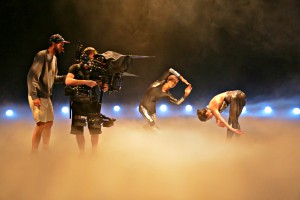 Coming from a shared background of working with a modern dance legend, former Merce Cunningham Dance Company members Rashaun Mitchell and Silas Riener embarked on an interdisciplinary adventure with filmmaker Charles Atlas. “Tesseract,” defined in the Merriam Webster dictionary as “the four-dimensional analogue of a cube,” is a live performance by a company of six dancers and two visual artists/technicians. This is preceded by Atlas’ 3D film of the dancers working within his own techno-visual creations.

Presented at REDCAT, the Roy and Edna Disney CalArts Theater in downtown Los Angeles, Nov. 30 through Dec. 2, this new work goes beyond the more conventional film-as-wallpaper for the onstage action to being a fully fleshed-out idea of “interdisciplinary.”

As each audience member accepts a pair of 3D glasses, the film begins with the geometrical shape of a cube on the screen. It rotates, inverts itself and changes its angles of presentation as it demonstrates its three dimensionality. What follows is a series of changing virtual environments and close, mid-range and distant dancing within these unique worlds.

The screen is filled with saturated colors, rectilinear, curvilinear and abstract forms and designs and evocative landscapes, both real and surreal. Weirdly familiar, yet not of this planet. At certain points, we see a kaleidoscopic arrangement of images punctuated by men and women moving in front of and across the tableaux. At other times, the movers partner with what seem like man-made constructions — spheres, hexagons, triangles. The sights are accompanied by what is commonly thought of as a space age ambient score by Fennesz.

Each of seven scenarios maintains its own oblique narrative, with none more dramatic than another and all exploring an assortment of compositional options technically available. This viewer’s most compelling moments of the film happened when two men’s heads were connected at the crown and we saw the faces in profile. Horizontally symmetrical, then irregular and mirrored variations ensued, all suggesting an undefined relationship between the two.

After a brief intermission where scrims and screens were arranged in the performing area, two dancers entered at a time. Dressed in opaque, one-piece, sculpted coveralls over off-white sports bras (for the women) and briefs (for all), each pair treaded a cubicle walking pattern on the stage. Costumes were designed by Reiner and Mitchell with Mary Jo Mecca and Yvette Helin. With a new sound score by Mas Ysa and lighting design by Davison Scandrett, dancers David Rafael Botana, Eleanor Hoolihan, Kate Jewett, Cori Kresge and the two choreographers trod throughout the domain.

Using a Cunningham-like vocabulary of long leg extensions and stretched torsos interspersed with weighted forms and arched spines, the performers were followed, preceded and visually examined by Steadicam operator Ryan Thomas Jenkins. His camera findings, immediately sent to Atlas on an unseen video mixer, were then projected upside down, around, in front of and behind the movers. Abstract visual treatments of motion translated into swirls and colorful lines. Intimate perspectives of the dancing brought the audience closer to the individuals, who always maintained a neutral countenance.

A solo for Jewett, moving on a diagonal trajectory from an upstage corner toward the audience, seemed personal and sensual. This quasi-emotionality seemed unlike anything that had happened before this point. As Jewett was on the floor physicalizing her journey, her enlarged face and body were projected above her. This provided one of the few times that reached to this audience member. Watching all the technical manipulations was interesting, pleasing and sometimes surprising, but less engaging than the human connection. One wonders if the three artists will take on any new projects together and whether this facet is something they may explore. Maybe not.