Review: Hilary Hahn with Mirga Gražinytė-Tyla and the LA Philharmonic 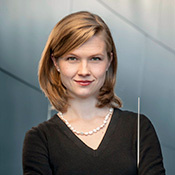 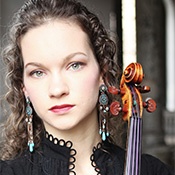 Los Angeles Philharmonic Assistant Conductor Mirga Gražinytė-Tyla stepped onto the podium Dec. 11 at Walt Disney Concert Hall — and once the music started, she stepped up again, this time where no man has gone before. Since Lithuanian native Gražinytė-Tyla arrived as a Dudamel Fellow in 2012, her experiences with the Phil have been met with critical acclaim. Her performance this evening was stellar; her interpretation of Tchaikovsky’s Symphony No. 4 electrified the hall with a night to remember.

Three-time Grammy Award-winning violinist Hilary Hahn brought Vieuxtemps’ Violin Concerto No. 4 in D minor, Op. 31 to life with her extraordinary virtuosity. True to Vieuxtemps, she was more elegant than showy with unfathomable technical challenge. Hahn gave a warm personality to the playful tunes. Repeat curtain calls and a standing ovation gave way to an encore of Bach’s unaccompanied “Loure,” the second movement from Partita No. 3 in E Major; BMV 1006. The contrast of Vieuxtemps’ energy with Bach’s Partita was stunning; all attention was focused on Hahn as we quieted under the brilliant tunefulness and artful turns. The acoustics of the hall are incredible, and her soaring energy filled the entire space. Bravo! Exquisite.

The program opened with Mieczysław Weinberg’s The Golden Key, Suite No. 4; Op. 55. Weinberg was closely associated with Shostakovich as a friend and fan, and his music shares unmistakable characteristics in melody, orchestration and rhythm. Gražinytė-Tyla was dynamic with graceful, smooth gestures. She is an expressive conductor, and her motion captured the satire of the underlying story as her hands danced with the cavorting critters of the puppet world. She brought Weinberg’s puppets to life using her magic baton. The dances were light and jerky as Gražinytė-Tyla became a master puppeteer freeing the unhappy puppets from their unhappy world. Delightful music.

Gražinytė-Tyla gave a deeply affective portrayal of Symphony No. 4 in F minor; Op. 36 that gave insight into Tchaikovsky’s psychological state of mind when he wrote it — a manic-depressive recovering from a broken marriage and subsequent suicide attempt. She conducted without a score, beautifully and forcefully expressing the deep and sincere emotion of every note. Her graceful movements gave way to jumps and kicks, her left fist jabbed, and her uppercuts were punches to remember. The finale was unbridled joy. The orchestra responded to her; together they produced a unique and inspired sound. Gražinytė-Tyla is a rising star — I certainly will look forward to hearing her conduct in the future.

Bravi to Mirga Gražinytė-Tyla and Hilary Hahn for a night to remember!