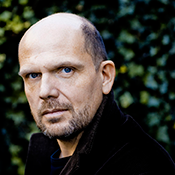 Van Zweden, the current music director of the Dallas Symphony Orchestra and the soon-to-be (2018-2019) music director of the New York Philharmonic, is a dynamo. His compact, but stocky body — like a linebacker or a boxer — exudes energy. As soon as he stepped on the podium, he assumed a stance like he was ready for battle. Once he launched into the famous first four notes of the Beethoven, it was clear that the audience was in for a treat.

Conducting Beethoven’s Fifth must be a little daunting because it is performed so often and is so well known that it is difficult to do much different with it. But under the baton of van Zweden it didn’t seem that difficult. His compact body fit well with Beethoven’s compact symphony, and he had the Phil playing as tight as I’ve heard them. He took full advantage of Beethoven’s marking of Allegro: Presto in the fourth movement, playing it as fast as I’ve heard it live, which gave the entire symphony a feeling of momentum building up to the final set of glorious C major chords.

The orchestra too was caught up in the momentum, swaying with the music like they rarely do, and some orchestra members exchanged smiles with one another, presumably enjoying playing this magnificent symphony under such an energetic conductor.

Van Zweden added his own Romantic nuances throughout the symphony, which didn’t detract from the classically structured score. And, being a violinist himself (the youngest concertmaster ever for the renowned Royal Concertgebouw Orchestra), he frequently urged the first violinists to use more vibrato.

We last reviewed van Zweden when he conducted the LA Phil in 2011 (see http://culturespotla.com/2010/04/jaap-van-zweden-and-simon-trpceski/) and weren’t wowed by his Brahms Fourth. But six years later, his Beethoven did wow. It was one of the best and most exciting performances of Beethoven’s Fifth I’ve heard.

Van Zweden, with a little help from Shostakovich, had the strings playing lusciously, especially in the third movement (Largo), and gave the percussion free reign to drive home Shostakovich’s intention in the finale, whether it was satirizing Stalin or simply a paean to the symphony as an art form.

The orchestra, led by all its principals, played exquisitely, in particular, the woodwind section. Whitney Crockett’s bassoon came alive, especially during the second movement (Allegretto, but very much like a scherzo). Denis Bouriakov’s flute soared like a bird. The clarinet of Boris Allakhverdyan was smooth as silk, and Andrew Lowy’s wailing E-flat clarinet is always a treat. It was also nice to see Principal Violist Carrie Dennis back (we haven’t seen her for a while), playing and looking like a woman possessed. The horns, led by guest horn player David Cooper, were glorious through the entire concert. Cooper is currently the principal horn for the DSO and in the fall of 2017 will become principal horn of the Berlin Philharmonic Orchestra — no wonder his sound was so exceptional.

Van Zweden is going to inherit a very good orchestra in the NY Phil, and it will be interesting to see what he can do with that storied ensemble. But I’ll put our hometown band up against the Big Apple’s orchestra any day.