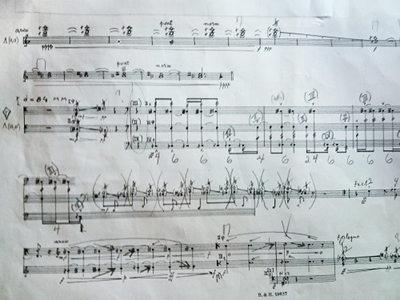 Jacaranda is a programming collaborative for modern music whose tagline is “Music at the Edge.” The two pieces featured in the Jan. 25 “Hallucination” concert at Santa Monica’s First Presbyterian Church — Nomos Alpha by Iannis Xenakis and Stimmung by Karlheinz Stockhausen — certainly fit that description. The compositions, both written in the 1960s, offer a vivid sample of the radical new directions composers were taking in the mid-20th century.

The evening’s aural adventure kicked off with Xenakis’ piece for solo cello, played with great aplomb by Tim Loo. As written, the piece is unplayable by a live solo performer and could only be realized with the help of a multi-track recording studio. The parts of the work that call for a single gut string detuned to the point of slackness, were, for this performance, pre-recorded and triggered via foot pedal by Loo.

Nomos Alpha begins with percussive effects, with the performer smacking his bow on the wooden cello body. This leads into a series of violent glissandos, with the performer’s fingers jerking up and down the neck. Loo wore a white plastic glove on his playing hand to protect his fingers, which must have become shredded practicing this piece. Shivery, jittery attacks and plucking with both hands were married with bowed duads that explored shifting tonalities and dissonances. Even though we know that Xenakis used complex mathematical sets to work out his composition, if you just sat back and listened uncritically, the piece evoked a kind of magical woodland effect, like a noisy bird fluttering about in the forest.

Stimmung, a work for six solo voices, was performed by VOXNOVA Italia, a group from Rome. Like Xenakis, Stockhausen used highly abstract, theoretical concepts to build his compositions. While the piece is said to have been inspired by walks through Mayan ruins in Mexico, and by his infant son’s sonorous gurgling while asleep, it comes off as more otherworldly and, in some ways, extra-human. What I mean is that Stockhausen was discarding the idea of musical phrases that had a fixed place in relation to phrases before and after, focusing instead on the quality of tonalities and improvisation in a milieu where normal sequential or temporal values are absent.

The piece is made up of 51 “models” of variable length. As one of the vocalists initiates a new segment, the others join in and gradually transform their own rhythm, tempo and dynamics until they come into “identity” with the leader. When the leader feels that the proper identity has been achieved, he or she signals so that another leader can begin the next model. The order of the models and the distribution of the spoken words — mostly the names of various pagan gods — are also left up to the performers.

Most of the performance came off as a long drone with repeating variations. The three men and three women of VOXNOVA changed the shape of their mouths and throats to explore tonality changes, mimicking filter sweeps of an oscillator. There was also a lot of nasality, and to be honest, it sometimes sounded like a mashup between Chinese opera and early Yoko Ono — and to me, that’s not good. The voices droned on for over an hour like this — after a while the effect became somewhat trancelike. As an exercise in musical philosophy, I can appreciate its structure and complexity, but as music itself, I see it more as a museum piece, designed to be dusted off and brought out for the curious every so often.

For information about Jacaranda and upcoming concerts, visit www.JacarandaMusic.org.