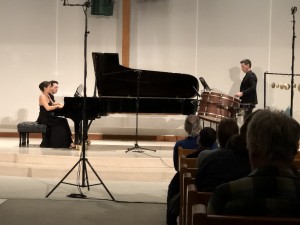 Admirers and detractors of Gustav Mahler can often agree at least on one thing: The man had a rare gift for effective orchestration. From the groaning solo contrabass in the First Symphony, to the “bird of death” in the Resurrection, to the disintegrating chamber-like textures of his Ninth and Tenth Symphonies, Mahler’s virtuosic exploitation of the symphony orchestra’s tone colors has been one of the linchpins of his enduring legacy. Despite that, or rather because of it, the composer was unduly attentive to the inner logic of his actual musical material. “All that is perfect down to the smallest details is doomed to perish,” he is reputed to have said.

Jacaranda Music in Santa Monica gave a rare opportunity for listeners to examine that perfection for itself Sunday night. Pianists Inna Faliks and Daniel Schlosberg presented Mahler’s Sixth Symphony in a piano four-hands arrangement prepared by his friend (and jilted ex-lover of his notoriously mercurial wife, Alma) Alexander von Zemlinsky. Augmented by the inclusion of some choice selections from the work’s percussion parts, it was a performance that stripped the music down to black and white, laying bare not only its formidable architectural unity, but also its teeth-clenching harmonies.

In a typically Mahlerian twist, the Sixth is simultaneously one of the composer’s strangest yet most conservative utterances. Horror, tearless grief and gurgling grotesquerie are neatly condensed into the symphony’s four movements which, while immensely augmented in length, are essentially built upon Haydenesque principals, right down to the exposition repeat in its first movement and its rondo-style finale.

Faliks and Schlosberg wasted no time in paying lip service to the legend and rumors that have encrusted themselves upon this score since its premiere over a century ago. Instead, subtle rubati and agogic emphases were carefully employed within a tightly assembled framework that eschewed overt emotionality in favor of musical coherence.

Likewise, there was no pretense to evoking the orchestra in this four-hands arrangement. It was a decidedly pianistic performance, with beautifully executed trills, judicious pedaling and richly shaded textures. If not supplanting the orchestral original, Zemlinsky’s version as played by Faliks and Schlosberg was a valuable opportunity to peer beneath the symphony’s instrumental garb and hear the symphony’s fascinating inner workings. (A minor detail not mentioned in performance was that the arrangement was based upon the first version of the symphony, which has a few minor textural and melodic discrepancies with the final. However, the ordering of the middle movements was per the final version.)

Percussionist Eddie Meneses performed the triangle, cowbells, xylophone, switches, “hammer” and snare drum parts with precision, always attentive to balance. However, the listener familiar with the symphony was left puzzled by how certain crucial entries for snare drum, triangle and xylophone were omitted at moments without explanation. Nor did the bass drum used for the finale’s notorious “hammer” quite match the composer’s aural ideal of a “fall of an axe.”

Small quibbles notwithstanding, the performance by Faliks, Schlosberg and Meneses was not only a valuable chance to hear certain facets of Mahler’s music in a new light, buy it also banished the sentimentalizing and armchair-psychologizing his work is too often subjected to. Their hands swept the Mahler of contemporary legend — that whimpering, death-haunted neurasthenic — right off the stage. Stepping before the audience at Santa Monica’s First Presbyterian Church was the man himself: The lover of mountain climbing, emotionally probing yet always rational, and confident in his artistic destiny.

For information about Jacaranda, visit https://www.jacarandamusic.org.