Review: Jazz and Dance at the Hollywood Bowl 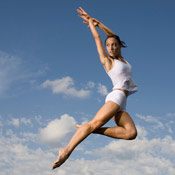 I imagine the artists who had the Hollywood Bowl stomping and shaking on Aug. 18 were booked well before April 20, when an explosion aboard BP’s Deepwater Horizon precipitated the unthinkable. But Wednesday’s lineup of New Orleans music legends — the Dirty Dozen Brass Band, the Preservation Hall Jazz Band, and the Neville Brothers — paid tribute to a city that’s taken blow upon blow. And lending awe-inspiring physical form to a history of grief, endurance and vibrant spirit, dancers from the Trey McIntyre Project shared the stage with the Preservation Hall Jazz Band in their electrifying 2008 collaboration, Ma Maison.

“If you hear that beat …” In raspy barks that sound like the blasts from his trumpet, Efrem Towns of the Dirty Dozen Brass Band calls, “Get up outta your seat,” and we gladly obey. The DDBB plays the music of a fading New Orleans institution: brass bands that perform dirges for funerals, and swinging dance tunes once the somber processions pass by. Here, rattling ragtime syncopations, martial marching band rat-a-tats, and racing, trilling, squealing horns keep us clapping and chanting “My feet … can’t … fail me now” along with “ET,” and we see mostly the mirthful side of the tradition. But in the bright choruses — “No matter what you heard, everythin’s alright and we gonna be alright” — throbs a mix of pain and fierce pride, hopeful mourning within the merriment.

After intermission, lights come up on the Preservation Hall Jazz Band, and picnickers around me sit up and take notice. In black and white formal wear, arranged in neat, seated formation, with band name printed on drum and tuba, they play classic New Orleans jazz in old school style — standing in unison when tinny banjo and grunting trombone rev to a climax, and gesturing theatrically to show us how “everybody lookin’” at the “Short Dress Gal” in their song. The slightly stiff, choreographed feel is such a deliberate and welcome departure from today’s performance conventions that I find myself smiling through the set.

A high steppin’, jelly-legged, rag-tag bunch of skeletons joins the suits on stage for Ma Maison, and together, with Sister Gertrude Morgan via recording, they generate an otherworldly energy. A skeleton in a jaunty green vest tosses white hands and feet out with the percussive hits of Carl LeBlanc’s strong banjo strumming in “Heebie Jeebies,” until a limb locks straight and he hobbles peg-legged in silly circles. The revelry feels mostly like joyful hilarity, but when one bag o’ bones keeps collapsing into his partner we smell death and feel frantic fear creep into the group’s sideways scurries and crazed kicks.

Morbid references lurk in all corners of this house — in the spidery shadows cast by spindly skeleton arms, in the bowed heads and softly prancing feet that sometimes turn the perpetual Mardi Gras parade into a solemn procession, and in the quick group exits with one merrymaker held stiff, aloft. But this crew parties in the face of death, hitching up legs, pumping arms, and leapfrogging over one another while the band sings, “Life is complicated … Oh, life is overrated.”

McIntyre works masterfully with the music, and he builds a movement vocabulary that draws on his dancers’ balletic virtuosity while transforming them into shaking, shimmying Lindy Hoppers who get down more convincingly than any ballet company I’ve seen.

The skeletons take their party into the wings, but New Orleans’ first family of R&B, the Neville Brothers, keeps our celebration of the Big Easy going strong. Cyril slaps the drums and throws out fiery vocals in choppy bursts. Art’s fingers find funky up accents at the organ, while he sings, smirking, “Me oh my oh … gonna catch all the fish on the bayou.” Charles releases great swelling waves from the sax, then pulls back with a gentle turn to reveal Aaron’s voice — clear and shivering with soul. With eyes squeezed shut and shoulders hunched, he sings, “Long time comin’, change gonna come,” and I hear a wail rising under the soft, sweet sound.

Catch the conclusion of Jazz at the Bowl 2010 on Sept. 1, when Herbie Hancock celebrates his 70th birthday with help from a host of special musical guests.