Review: Jeremy Denk at the Wallis 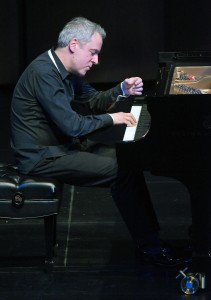 Jeremy Denk performs at the Wallis. / Photo by Kevin Parry

On April 25, the American pianist and MacArthur “Genius” Fellow Jeremy Denk performed a recital of works by Mozart, Prokofiev, Beethoven and Schubert in the Bram Goldsmith Theatre of the Wallis Annenberg Center for the Performing Arts in Beverly Hills.

Denk began the program on a quiet, melancholic note with the Rondo in A minor, K. 511 by Mozart. Composed fairly later in his life (four years before his death), this brief gem (about 10 minutes) may have begun as an improvisational piece by Mozart, and its heavy ornamentation allows the performer to put his or her own mark on it. The chromaticism has led some musicologists to posit that it influenced Chopin and, thus, the piece looks forward to the Romantic era.

Denk certainly put his mark on the Rondo, taking full advantage of the ornamentation by emphasizing the dynamic extremes and taking liberties with the tempo markings. The result was a wonderfully romanticized version of the piece.

Following the Mozart, Denk performed the Visions fugitives Op. 22 by Prokofiev. The work consists of 20 short (between one and two minutes) piano pieces. Many of them are dissonant, but they come off sounding more impressionistic in the vein of Debussy. Overall the pieces are low key and contrast with some of the more well-known piano sonatas and concertos which are loud and raucous.

Denk clearly had fun with each of these whimsical miniatures, and he delighted the audience with Prokofiev’s humor. However, his concentration in playing the Visions fugitives was no less than it was for the other, more serious pieces.

Denk closed out the first half with the Piano Sonata No. 30 in E major, Op. 109 by Beethoven, the antepenultimate of his piano sonatas. This sonata, following as it does on the heels of the large and expansive Sonata No. 29, “Hammerklavier,” is smaller and much more intimate, though not as much as the two sonatas that followed. Although the first movement in E major begins fairly playfully, it quickly becomes more nostalgic. The second movement (Prestissimo) in E minor is more urgent, but it sets the stage for the final movement — a theme and variations that is a masterpiece in and of itself. The theme is a meditative song that can fool the listener into thinking it is really a third slow movement. But the following six variations take the listener on a journey through Beethoven’s vast musical intelligence with hints of Haydn and Bach, all the while building up to a crescendo of monumental proportions until it returns to the elegiac theme. The movement ends, as it began, on a quiet note.

Denk’s performance let the audience into the soul of Beethoven in his last years and was as contemplative as the sonata itself.

The second half consisted of one work, the Piano Sonata No. 21 in B-flat major, D. 960 by Schubert. Unbelievably, this monumental piano sonata, along with all of Schubert’s sonatas, was neglected until the 20th century. Now the Schubert sonatas are recognized as masterpieces of the early Romantic era. The Sonata in B-flat major is the culmination of them. It was written only two months before Schubert died, and it is impossible to listen to it without the context of death.

The first movement begins, not unlike the third movement of the Beethoven, with a simple song that is interrupted with the famous G-flat trill, which conjures his impending death. For the next 20 minutes or so, Schubert dramatically expands the theme with different tonalities and keys. The second movement is simply devastating, and as classicist Michael Jameson wrote, it “takes us to the brink of the abyss: that remote, solitary place which T.S. Eliot knew as ‘the still point of the turning world.’” The third movement, “con delicatezza,” is comparatively light and lively, but still with hints of tension. The finale is more the style of early Schubert, and even though there are sections that remind us of the gravity of Schubert’s situation, it ends on a more positive note.

As with his Beethoven, Denk was able to match his unique pianistic skills with Schubert’s moody sonata. His playing sang when it needed to and created urgency when it was called for. Denk penetrated the depths of this sonata with clarity, making it seem almost simple, which can only be accomplished by a great pianist.

Denk returned to Mozart for his only encore. After a recital of technically and musically demanding works, Denk chose the Andante movement from Mozart’s Piano Sonata No. 16 in C major, K. 545, which Mozart himself described as for beginners. That is somewhat deceptive because what was for Mozart a piece for beginners is for mortals perhaps not so easy. But Denk is no mortal at the piano. His uncanny ability to make each note sound like the key is being massaged instead of struck was especially evident in this simple movement.

On Wednesday night, Denk demonstrated why he is truly one of American’s premier pianists with his unique relationship to the music and the piano. Throughout the recital, Denk played for himself as if in a trance, seemingly unaware of anything except the music. Fortunately, he allowed the audience to join him for a magical evening of great music making.