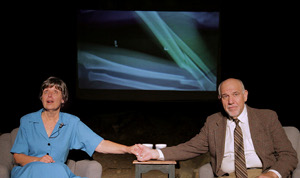 I couldn’t sleep after seeing “Tone Clusters” at Will Geer’s Theatricum Botanicum in Topanga. Joyce Carol Oates’ intense one-act left me with a lot to think about —  heavy, unsettling stuff like guilt and innocence, truth, memory and tragedy. This powerful production and the top-notch performers were lauded by the playwright herself on opening night, Sept. 5.

Real-life married couple Alan Blumenfeld and Katherine James portray Frank and Emily Gulick, whose ordinary lives in a New Jersey suburb are turned upside-down when their son is accused of murdering a neighborhood girl. Decades-long friendships dissolve in an instant, and they become pariahs. Frank and Emily appear on a TV news show, where they attempt to clear their son’s name as they are grilled by an offstage interviewer played by Jeff Weisen. First performed in 1990, “Tone Clusters” predicted today’s 24/7 voyeuristic news environment where strangers’ real tragedies feed our appetite for vicarious drama.

Blumenfeld is pitch-perfect as the tough but loving father, with both anger and despair brimming just below the surface. His sarcastic laugh (used sparingly and to great effect) is a wonderfully chosen character tic. James plays the naïve housewife who unintentionally reveals damning information about their son with a sublime guilelessness that almost places her in a bygone era. Neither parent can believe for a moment that their son might be guilty; we sense how devastating the thought could be. Weisen — with voice alone — convinces as the detached journalist who often forgets his interviewees’ names.

In the talk-back, Oates mentioned that she first wrote “Tone Clusters” as a poem with two voices and then stylized it for a play. The title, she said, refers to experimental piano music of the 20th century in which the pianist plays chords but there is no memory or resonance because his foot is not on the pedal.

The play is a masterpiece of language, an unraveling of memory and truth. The more the parents talk, the less they are able to recall details and the guiltier their son becomes in the eyes of the audience. Oates talked about this phenomenon in the talk-balk after the show, pointing out how the parents have the best intentions but become overwhelmed and start talking in clichés and repeating things compulsively. “The more they think, they more they are almost lost in a vast sea of not knowing,” she said.

“Tone Clusters” is about “not knowing,” that uncertainty that dogs all human events, but which is especially frustrating in the case of crimes such as the one the Gulicks’ son was accused of (the play is based on a true story). The play also raises issues of free will and determinism through the interviewer’s sometimes absurdly obtuse and esoteric questions (such as subatomic biological determinants of behavior) that befuddle the Gulicks and seem to emphasize the futility of trying to explain everything intellectually. Although there are moments of comedy in the play, the characters are certainly unaware of it.

Chris Sibley did a remarkable job of creating the video segments that run on a big screen behind the Gulicks in between questions. They reveal the family home and the scene of the crime as well as introduce evidence and other questions. Oates herself called them “poetic images” that enhanced the dialogue. The venue deserves mention because it is so unusual and brought an interesting contrast to the video elements in this production — outdoors under the huge umbrellas of trees with crickets chirping, Topanga Canyon Boulevard traffic and the occasional dogs barking in the distance.

Director Mike Peebler plays with what Oates described as “our yearning for a coherent narrative” by including four monologues before the one-act: “I Stand Before You Naked,” “The Secret Mirror,” “Slow Motion” and “The Orange. Though it’s tempting to draw parallels between the characters in Oates’ monologues and “Tone Clusters,” the director preferred that the connections remain ambiguous (more uncomfortable, nagging uncertainty).

The monologues are intensely personal moments with characters seeking love from others and themselves: Jonathan Blandino presents a stunning portrait of a young man struggling with his desire to dress like a woman, Cynthia Kania takes us to the edge as a woman on the brink of a moment of discovery that will change her life forever, and Sarah Lyddan exhibits (in Oates’ own words that night) “extraordinary facial expressions and anguish” as an anorexic girl who can’t bear the fact that she has no control over how others see her. At the very least, they effectively set the mood and the stage for “Tone Clusters,” and make it painfully clear that this is not going to be an evening of light entertainment.