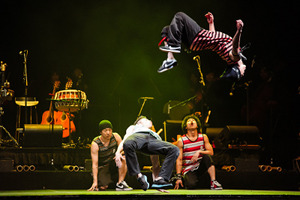 I was just about the only white person in the audience at “2012 Sounds of Friendship” at the Wilshire Ebell Theatre on Oct. 9. The night’s lineup offered a glimpse at the “hallyu” (Korean Wave), or the surge and spread in popularity of Korean pop culture, with performances by musicians, singers and dancers representing both traditional and modern art forms. The show was free, but interested parties had to pick up tickets at the Korean Cultural Center. Hence, the majority of Korean faces in the audience.

Los Angeles is home to the largest population of Korean Americans and Korean residents in the United States. Diplomacy is best achieved through song and dance. This year, in particular, marks the 130th anniversary of friendship between the Republic of Korea and the United States, and the South Korea-U.S. Free Trade Agreement took effect in March 2012. “Sounds of Friendship,” the program announces, celebrates the long-standing relationship between the two countries.

But where were the non-Koreans? The promotional travel images of Korea during the opener projecting on the wall in back of the drumming collective GongMyoung hinted that this program might just be aimed at Koreans living abroad, possibly to entice them to visit their homeland.

The following commentary has a disclaimer: These are reflections from a non-Korean. As a Jewish American, I felt like an outsider. Most of the songs were in Korean, save for “You Raise Me Up,” and everything from the costumes to the imagery to the instruments and rhythms were Korean. Certain elements of the show were familiar to audience members, like during “Ssukdaemeori” when people shouted out. I’m not sure what their exclamations meant, but it was fun to hear the call-and-response interaction, sort of like that of a preacher and congregation.

My favorite parts of the evening were: Hye-Ah Na, a fourth-year dance student, appearing otherworldly as she floated around the stage, moving slowly then quickening, yet always looking as if her feet never touched the floor; and GongMyoung playing hourglass-shaped drums, called Janggu, and a bamboo instrument of their own creation named after the group. The guys often worked themselves into a trance, but always looked in sync, often nodding and grinning at each other with approval.

Best of all, the well-known b-boys of Gorilla Crew — four breakers and two poppers/lockers — showcased what happens when U.S. culture collides with Korea. The four muscle men flipped from standing — and running — positions, held freezes demonstrating unbelievable balance and strength, and spun around on their backs and heads with bravado. The tallest of the crew was especially adept at standing on his hands, one time letting his straight legs tilt over to the side without touching the ground, and another folding his legs up and rocking back so his torso and arms were at a 60-degree angle (his legs still folded above his head). I could see his bulging oblique muscles from the 15th row. The poppers added the funk, playing with speed and beats Matrix-style, and humor with Kid ‘n Play’s signature “Funky Charleston” move and even a four-count of “Gangnam Style.”

South Koreans are extremely good breakers. They have won first place in five out of the last eight years of the Battle of the Year international b-boy competition. It’s obvious why the Gorilla Crew makes Korea proud. These guys would have no problem attracting a more diverse crowd.