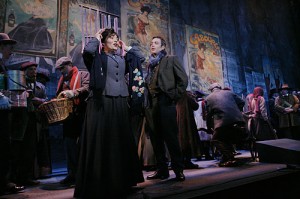 With La Bohème, Puccini sought to write an opera in the fashionable verismo style that took as its subject everyday life and attempted to treat it in a realistic manner. While his opera dates from the mid-1890s, his source material was a series of stories written in the 1840s by Henri Murger, which depicted real people and real places in Paris’ Left Bank — Bohemia, as it was known. The Paris of this era was one before the wide tree-lined boulevards, good sewage and paving. In LA Opera’s revival production, the detailed sets provide an image of 19th-century Bohemia that is “realistic” in its ramshackle appearance and utter impoverishment, but the opera’s internal logic can be a bit puzzling in other ways.

You might wonder what a bunch of Italians — speaking Italian — are doing in 1840s Paris. Or you may be confused by how the seemingly greatest love of all time has collapsed a matter of minutes later. No matter, merely details. It is refreshing, however, to see a cast of La Bohème that is youthful enough to be believable. Too often, we see geriatric 50-somethings trying to make us believe that they are the struggling young romantics that the opera depicts. Suspending disbelief can be a chore in these cases.

The uniformly young artists we see onstage here may have something to do with LA Opera’s recent penchant (necessity?) for eschewing big-name stars (excepting LA Opera’s own Plácido Domingo) in favor of lesser-known or emerging opera voices. At least three of the principal singers here have come out of the Domingo-Thornton Young Artists program. Of particular note is Janai Brugger, the 2012 winner of the Metropolitan Opera National Council Auditions, who is remarkably good as Musetta. Her voice is powerful and hall-filling, and I was particularly struck by her acting. Flirty one minute and petulant the next, she is just plain fun to watch. Please be aware, though, that she shares this role with another singer, the striking Valentina Fleer.

Something else unusual about the cast is the fact that the two main characters —Rodolfo and Mimi, played by Stephen Costello and Ailyn Perez — are husband and wife in real life. Their easy chemistry and solid vocal performances are another tick in the plus column for this production. I have to say, even though I shrink from clowns in general, I enjoyed watching the character of Parpignol, the toy vendor, who is presented as an orange-haired, face-painted scarecrow.

Director Gregory Fortner has made some nice tweaks to this production. Act II at the Cafe Momus is a wonderful riot of color, confetti, crowds and confusion that reaffirms just what it is about this opera that makes it one of the most popular of all time. Only a curmudgeon could be unmoved by all the charivari. Perhaps the strongest moment of all comes at the end of Act III where there is a masterful vocal and dramatic interplay between Rodolfo and Mimi, who are pledging eternal love, and Marcello and Musetta, who are concurrently breaking up. I also like the effect, used at least twice, of actors walking offstage as they complete their duets at the end of scenes, leaving us with a nicely modulated fade-out.

As always, Puccini’s music is charming and easy to like. Conductor Patrick Summers, in his LA Opera debut, understands the drama in the music and uses his percussionist to great effect with impressive use of the thunderous large (bass) tympani. Side note for music buffs: This is one of the few “classic” operas that you can hear on disc with its original conductor. It was a young Arturo Toscanini who was on stage in the 1896 debut in Turin, and his 1946 RCA Victor recording of this opera is still available.

By all means, get out to see La Bohème and bring your less-opera-savvy friends — they will very likely enjoy it too. In the meantime, I’ll be at the Cafe Momus, nursing an absinthe.