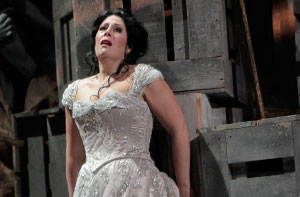 There’s something very comforting about re-reading a favorite book or watching a movie you remember all the words to. Opera-goers know all about that. That’s why warhorses like “Tosca” pop up every season. LA Opera has brought back its 2013 production of Puccini’s dark masterpiece, complete with torture, murder and suicide, to the Dorothy Chandler Pavilion through May 13.

Culture Spot’s David Maurer paints the scene for us in his 2013 review (http://culturespotla.com/2013/05/review-tosca-at-la-opera/), so we won’t reiterate everything about the production here. It’s still worth mentioning, however, how impressive Bunny Christie’s scenery is. The fractured canvas with Cavaradossi’s Mary Magdalene on scaffolding in the candlelit church in act one, the stolen sculptures and paintings bursting from wooden crates in act two, and the way Duane Schuler’s lighting shines a soft focus on the Mary and Jesus statues in both of those acts — all of this art stands in stark contrast to the cold, barren prison yard in act three. These three “paintings” are the perfect setting for Giuseppe Giacosa and Luigi Illica’s poetic libretto, based on Victorien Sardou’s play, “La Tosca,” and, of course, Puccini’s exquisite music with its well-known lyrical arias and leitmotifs.

American soprano Sondra Radvanovsky, an acclaimed Verdi soprano who has also dazzled audiences as Tosca at the Met and La Scala, returned as Tosca — and was completely captivating. Radvanovsky stole the night with her amazing “Vissi d’arte.” The aria she sings while crouched on the floor pleading to a small statue of Mary caused the audience to erupt in spontaneous and enthusiastic applause that lasted for a notably long time as she held her supplicating pose. A compelling actress, Radvanovsky lost herself in the role of Tosca; every emotion, from jealous anger and intense disgust to playful love and complete dispair, was clearly conveyed through expression and gesture. Her energy was palpable and bubbled forth in ebullience during the curtain call as she teased Ambrogio Maestri (Scarpia).

It almost goes without saying, but they deserve the shout out: James Conlon and the LA Opera orchestra were amazing. Even if you’ve seen “Tosca” a million times, don’t miss the chance to hear them.