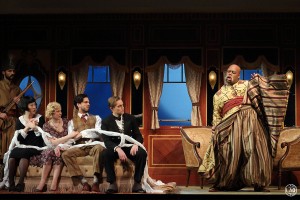 When Wolfgang Mozart was born in 1756, there would still have been many old-timers who remembered the great siege of Vienna by Ottoman Turkish hordes in 1683. While the threat of Muslim aggression grew ever less worrisome with succeeding years, Mozart, like most Europeans, remained fascinated by the strange, impenetrable world of the sultans in Istanbul. His opera, Abduction From the Seraglio, plays up this interest with a clash-of-cultures story that has remained one of his most beloved operas. For the current LA Opera production, the setting has been moved from a Turkish harem to a train car on the Orient Express in the 1920s, presumably just a year or two before the abolition of the caliphate by Ataturk.

Conductor James Conlon starts us off with Mozart’s familiar opening refrain, while the audience sees a large map of Europe and the Middle East showing the routes of the Orient Express and the major stops. At various times throughout the opera, this map reappears to pinpoint with a light where we are on the journey from Istanbul to Paris. When the curtain rises, we behold a lavishly upholstered and paneled train car with adjacent service rooms that span the width of the stage. This is Pasha Selim’s private train car in which he holds prisoner three Westerners whom he bought from Barbary pirates: Konstanze (fiancée of Belmonte and object of Selim’s affection), Pedrillo (Belmonte’s servant) and Blonde (Kostanze’s maid). During the opera, the car shifts to the left or right, cleverly revealing other rooms while scenery whizzes by in the car windows at rear.

Aside from the characters just mentioned, it is hard to miss the enormous, and enormously entertaining, figure of Osmin, Selim’s overseer and bodyguard. Baritone Morris Robinson plays Osmin with just the right mix of bombast, contempt and cluelessness, making for a memorably funny performance, even if he has a little problem getting volume on his most subterranean notes. The other standout was So Young Park’s Blonde. What a clear, beautiful voice; everyone noticed and clearly appreciated her vocal gift, not to mention her spunky no-nonsense acting.

British soprano Sally Mathews, making her LA Opera debut, sang Kostanze with a darker, mezzo-style voice, and while she showed good coloratura technique, her acting seemed bland and flat. Likewise, Hamish Linklater’s Selim, while competent, was not given much to do and seemed like a vintage version of The Most Interesting Man in the World. Brenton Ryan, an alum of the Young Artist Program did better as Pedrillo, showing a natural comic ease playing the mischievous servant. Joel Prieto made a dashing Belmonte, albeit with a rather high and somewhat thin tenor voice.

As the train makes its way to Paris, the implausible plot is leavened with plenty of humor, mostly at Osmin’s expense. His Ottoman outfits are at once regal and comical replete with fez, big sashes and parachute pants. Pedrillo and Belmonte hatch their harebrained scheme to abduct the hostages from the train car via a “ladder” made of knotted sheets, while each sings of the pain of unrequited love. They are caught, of course, and just as the train is pulling into the Paris station, we find out that Belmonte is the son of Selim’s most-hated enemy, seemingly ensuring the young man’s cruel fate. Inexplicably, however, the Pasha suddenly turns all sentimental and gives them their freedom, ending the opera with all lovers reunited.

It has been a good year for Abduction in L.A.—last summer Pacific Opera Project sold out the Ford Theater for a hilarious one-night reprise of their Star Trek-themed version with aliens and ray guns. Obviously, this current production is more sleek, sophisticated and clever with its great set borrowed from the Houston Grand Opera. But both productions successfully mine the perennially popular theme of wicked aliens abducting our bright young ones. And both present an always-welcome opportunity to listen to maestro Mozart at the top of his musical game.

Abduction From the Seraglio continues through Feb. 19. For information and tickets, visit https://www.laopera.org/season/16-17-season/abduction-from-the-seraglio/.