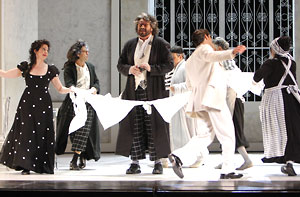 Spring is coming and romance is in the air again, percolating through the hallowed halls of the Dorothy Chandler Pavilion. Yes, The Barber of Seville is back at LA Opera and with it, its delightful troupe of lovers, schemers, bumblers and blowhards. It’s the same production as was here in 2009, but no matter — after five years, any competent production of this most entertaining of bel canto operas is essential nourishment for most aficionados.

The subtitle of Rossini’s The Barber of Seville is The Useless Precaution. It suggests that sometimes, a thing that is meant to be will happen, no matter what measures are taken to prevent it. In the most obvious sense, it refers to the budding romance between Count Almaviva and Rosina, the young student at the heart of the drama. But it also reminds me of the challenges this work and its creators overcame that lead to the enshrinement of Il Barbiere as one of the most enduring oeuvres in Western culture.

The original story, a play by Pierre Beaumarchais, was at first offered as a comic opera, but was rejected by Paris’ prevailing cultural gatekeepers. Modified into a play that debuted in 1775, it was at first poorly received and might have sunk without a trace but for some quick editing and rewriting by Beaumarchais. Likewise, the opening of Rossini’s opera in Rome in 1816 was a disaster. A rival, Giovanni Paisiello, who had already written what was supposed to be the definitive opera based on the play, had seeded the opening night crowd with his confederates who booed and hissed throughout the performance. But by the second performance, it was clear that Rossini’s version was a roaring success and Paisiello’s work was quickly forgotten.

In this revival, directed by Trevore Ross, we have the same (as 2009) ivory and pale grey color palette reminiscent of the sun-bleached houses of Southern Spain, the same movable housing components and roughly the same costuming. What’s different, of course, is the singers. As a whole, they are equally as impressive as the sterling cast chosen for the earlier production. Rosina is played by American mezzo-soprano Elizabeth DeShong, a rising star who is extremely impressive with her command of coloratura, vocal trills and controlled dynamics. She demonstrated her ability to skip from coy and delicate to fierce and forceful in an instant.

Of the male roles, I preferred Don Basilio (Icelandic bass Kristinn Sigmundsson), Figaro (Russian baritone Rodion Pogossov), Bartolo (Italian baritone Alessandro Corbelli) and Count Almaviva (American tenor René Barbera), in that order. While Don Basilio might be thought of as a minor role in the opera, Sigmundsson’s imposing physical size and subterranean basso made one sit up and take notice every time he appeared. His stuttery patter, stately composure and air of bafflement combined to make a persona at once worthy of ridicule and respect. Pogossov’s Figaro seemed brimming with life, vigor and bravado macho appeal, not qualities one might associate with any brooding Russian. His clear, strong voice likewise commanded attention, easily filling the hall.

Unfortunately, I did not feel Barbera as Almaviva was especially effective in generating the chemistry that should exist between young lovers. The romance between him, in all his clever disguises, and Rosina should be the beating heart of this comic opera, and their yearning keeps things from descending into mere farce. Ultimately, the farcical elements dominated, as the romantic aspect never got much beyond a simmer.

The Barber of Seville was the first of Beaumarchais’ so-called “Figaro Trilogy,” the other two being The Marriage of Figaro (1784) and The Guilty Mother (1792). LA Opera is giving us the entire trilogy this season — Mozart’s Marriage of Figaro is on deck, while The Ghosts of Versailles, staged earlier this month (see Culture Spot’s review), is a modern adaptation of The Guilty Mother, which has never found representation in the standard opera repertoire.  Accompanying the operas is a three-month roster of events around town called Figaro Unbound that explore Beaumarchais and the revolutionary spirit he came to represent. An event list is available at http://www.laopera.org/Community/Figaro-Unbound/.